Tanks Are Not Ministerial Limousines 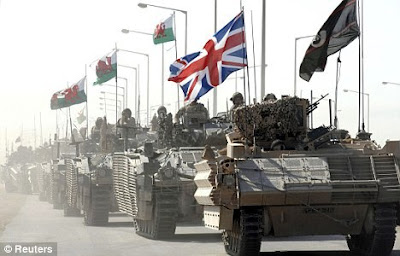 When politicians these days head for photo opportunities to do with the Army they instinctively want to he associated with the most expensive and lethal hardware available. Sometimes it might work, but only rarely. They finish up looking either superfluous or ridiculous, usually the latter. Mostly it displays their deep ignorance of the nature and implications of military action.

The allegations that the UK part of the Iraq invasion in 2003 was a shambles that often verged on disaster are likely true. The Daily Mail reports that the current Chilcot inquiry is being denied access to top secret documents written by senior commanders that set out the many and various failures, lack of planning and on the hoof political decisions that put British troops into the firing line with wholly inadequate resources and support.

This is no surprise. At the time there were critics who included a number of persons almost invariably found amongst the most hawkish of commentators on military and related matters. When it is not only the usual flock of doves complaining about the use of force but a collection of hawks, falcons and eagles then something odd is going on. Amongst the birds of prey and scavengers was a familiar vulture.

I was moved to write to a leading journal who actually printed it, near defamatory jeers and insults included. It was not matters of principle that moved me; nor even the issues of national interest, prestige and world influence. It was the fact that the Government of the day were intending to embark on a military action that could potentially break down.

We have a not so proud record of disasters, shambles and rank bad decisions down the centuries amongst the great victories and triumphs, so there is a lot of experience to draw on. Movement was the key. Given the poor security and extent of political leaking at the time it was possible for an informed observer to work out a great deal. It was clear to me and to other deniers amongst the traditional hawks that the figures simply did not add up.

In order to achieve the objectives probable then the number and level of front line troops were such that unless immediate success occurred we could be in serious trouble. This was both in terms of effective reinforcement and in the support necessary for complex movement, perhaps rebalancing the forward elements, and in terms of making any tactical readjustments necessary let alone strategic.

Critically, the amount of hardware and its backup deployed allowed only a very fine margin once the troops had been committed. Yet this was the best case scenario given the figures. If you looked at who was going, the materials they had, what they were being given in support, their recent experience and the relevant training and analytical work and real intelligence available it was nowhere near enough.

In the outcome it was the US air superiority that enabled the speed of victory and in the aftermath it was the US command and resources that the British became wholly dependent on. All the problems that the British encountered after the collapse of the main Iraqi forces reflected the lack of planning and provision made at the outset.

Moving, supplying, controlling, deploying and maintaining command numbers of troops is an extremely difficult and complex business. Been there, done that and with more men, tanks, equipment and support than went to Iraq. The trouble is that propaganda films show tanks charging about with a fine disregard for terrain, distance, fuel consumption and maintenance and repair. What they do not show is the harsh reality of the difficulties of their deployment in battle conditions and huge scale of mechanical work needed to keep them available for action and to move them any significant distance within limited time frames.

Tanks are difficult beasts to feed and run. At the time I stated that they needed their own kind of tender loving care which could not be supplied on a just in time basis from the local garage. In the invasion of Iraq it simply wasn’t there in the same way that the needs of the infantry were not properly supplied.

The trouble was that the Iraq war was run by a government that could not tell the difference between a main battle tank and a ministerial pool limousine.
Posted by Demetrius at 15:19