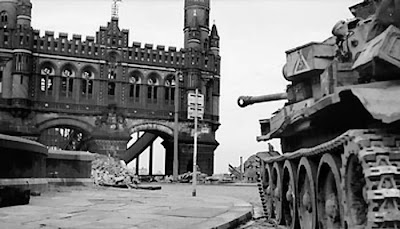 On Friday 26 June 2009, last year, I posted “I Know Where I’m Going” copied below, which put the question of whether the Labour Government had embarked on a deliberate “scorched earth” policy. With an interest in military history it was possible to see the signs of such an approach to tactics. Also, not much less than sixty years ago, I was involved in issuing Operation Orders in the event of a war in Europe. We had very practical ideas on the subject and as the photo above shows, our seniors who worked them out had a good deal of experience.

There are many ways and means of achieving such an objective and for differing purposes. It is more complicated than it seems. What have been told is that in the last year it is evident that there was no coherent purpose in the conduct of Labour. It seems to have been a mindless, ill contrived shambles, largely aimed at providing very personal benefits for those involved and their associates along the line of where the money went.

As “scorched earth” activity can lead to looting by uncontrolled and criminal mobs this has happened in effect. The more refined types are those conducted by regimes that loot the treasuries of their countries of which there are many examples, notably in places blessed or cursed with the attentions of the UK Aid agencies. It is very New Labour to have reduced UK’s public finances to this level.

What I want to know is where has the money gone and who has had it? My attitude is that this form of “scorched earth” amounts to criminal fraud. During the last 13 years we were all aware that peculation, corruption and fraud were all optional extras for members of the government and their helpers and that the relevant authorities were not merely reticent and fearful but often actually co-operative.

Of course, we will hear all about the needs of “privacy” for the great and greedy. Well, I haven’t got much privacy and nor have most people. Why should they be able to funnel public funds around and into protected Blind Trusts and other devices on one basis or another? If some ministers signed off big monies then were did it go? Did any at all find its way to people and accounts in which they had an interest?

Is anyone going to start an investigation into these people?

I believe that the Government has embarked on a “scorched earth” policy in anticipation of an electoral defeat together with a substantial clear out of the present Labour Party in the House of Commons. It is the only rational explanation for its present course of action and behaviour.

Government is about choosing priorities, allocating resources, and dealing with legislation, along with other duties and obligations. The intended effect is to wreck the ability of any new administration to determine any independent decision for the UK. It is to enable the effective decisions in major areas of policy to be put into the hands of the EU. Financially, the budget options will be predetermined by a disastrous fiscal situation and related international commitments that will be impossible to be freed from in the short term.

If the EU gets its way in Ireland and Denmark, the Lisbon Treaty will be in force by this Autumn, and the problems arising for a new government trying to make changes in the way they affect the UK will be intractable, whoever is in charge in Europe. I would not be surprised if during the Parliamentary recess, the moves necessary for the UK to enter the Euro currency will be under way, and may proceed rapidly, given the willingness of the Government to agree terms and make concessions. Perhaps 1st January or 1st April 2010 is already pencilled in for the vesting date.

In preparation for this the Government has been proposing actions around the “Regions”, those historical remnants from the early years of the Cold War assumed by political laziness and administrative stupidity to be an easy way of dividing up England for Whitehall, and then EU purposes. We are going to hear a lot more about the need for the regions in the recession, given the parallel need to find jobs and places, preferably with generous expenses, for all those displaced Labour MP’s and lost cause candidates.

As for priorities, the financial problems a new administration will have to deal with will be not just difficult, but plain nasty. In the NHS it will a question of who dies, and in social security who goes hungry. Commitments will be made in Defence that will bear no relation to requirements, but to job creation, and our forces will become little better than a peripatetic militia. As for education, how many universities will be closing, and other colleges going to the wall after January 2010, because of decisions made by the outgoing Labour administration?

The most dangerous consequences of all this arise from all the uncertainties and the uncontrollable matters that can arise in the world economy. Where the oil prices might go and by how much is a matter of bitter debate. The movement and interplay of currencies is currently a game of liar’s poker. Where interest rates may go in relation to the sovereign debt of too many badly extended countries, and whose credit might fail is still unknown. But the UK and the USA are both much too high on the list for comfort. If the government leaves the UK with junk bond status, it effectively means goodbye for the independence and coherence of the UK.

Quite a number of the prophets of doom out there are talking about the end of the nation state and the end of the industrial world as we know it. The Government are embarked on a course which could mean that the UK which began the Industrial Revolution will be the first to relapse into urban predatory tribalism.