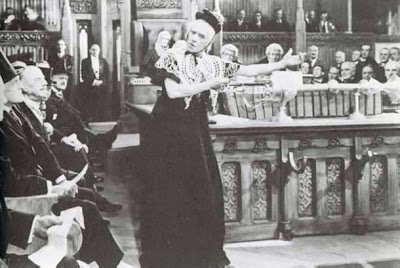 As I have often used the term “Old Mother Riley Economics” it is time to explain what I mean. The heading might suggest that this blog has taken a turn for the deeply politically incorrect, but you need to know your Old Mother Riley from your Clark Gable to understand that it is not the case. The famous, and much loved, music hall turn of Arthur Lucan and Kitty McShane made fifteen films in their time and could pack the local variety halls at the peak of their career. Arthur was Old Mother Riley, a cross dressing role where he played a difficult and unpredictable elderly washer woman who more or less always triumphed against men and her social superiors, and Kitty, who played the daughter, was the straight part.

Arthur and Kitty were married in real life and she ruled him with a rod of iron. I saw them live on stage a time or two, and part of the act was to relate to difficulties and hazards of the ordinary people, with the lack of money at the end of the week being a constant theme. This sketch I recall from the late 1940’s offered many people the most rational explanation of the economic policy of Sir Stafford Cripps at the time, and perhaps made more sense. They were concerned with the economics of reality but this sketch did not make it into any film, for obvious reasons given the period and the grip of the film censors.

OMR and Kitty are in their kitchen.

K - Mother, we haven’t any money and its only Tuesday.
OMR – I don’t know where it all goes.
K – You’ve been buying rum again.
OMR - I haven’t had a drop since Mafeking Night.
K – When was that?
OMR – Yesterday, oops, a long time ago.

K – How can we get some money for food, the light and the rent?
OMR – There is some washing to do.
K – Mother, its our own washing, how can we get paid to do that?
OMR – The man next door will give to me.
K – Why would he want to do that?
OMR (looking coy) – Well I make his tea for him when his wife’s out.
K – What does she think about that?
OMR advances down stage, flaps her skirts, leers at the audience, and says – She says it saves her all the trouble!
K – Oh mother, mother, exits.
OMR pours herself a cup of tea, takes a rum bottle from behind the sink, shakes her head and puts it back.

Knock on door, OMR says “Come in”, a small man with a large hat, which he removes to show he is bald, and carrying a notebook and satchel enters. He is the rent man, and everyone knows it. He tells OMR she is behind on the rent, and there is then a long diatribe of nonsense, at the end of which he demands the rent again. Another knock, another man, carrying a bucket, obviously the window cleaner, he wants his money, another comedy routine.

Another knock, another man, now the milkman, also wanting payment. OMR flaps about fussing, and while the men begin to argue with each other dips her hand into the satchel to take out some money. She then tells the men to line up, and goes to the milkman, puts money in his right hand, tells him to transfer it to his left, and pass it on to the window cleaner, who then passes it onto the rent man, who puts it into his satchel.

OMR now tells them they have all been paid and to get out. The rent man looks in his satchel and realises he has been conned. An arm waving loud argument starts that degenerates into a bout of major slapstick that wrecks the kitchen. When OMR finally sits on the rent man he pulls out a police whistle and blows. In those days rent men always carried police whistles, and the policeman was usually nearby. A Police Officer rushes in, OMR claims she has been attacked for her money, picking up the satchel, and the men have tarnished her virtue, feigning a dramatic swoon. The men are arrested and marched out. OMR pours another cup of tea, and sits down.

K- Mother, mother, what have you done?
OMR – I’ve just tidied up dear.

OMR drains her cup takes money from the satchel and gives it to Kitty, telling her to go and get some groceries. Kitty leaves, OMR goes to the sink, gets out the rum, fills the cup, and then goes forward to toast the audience.

Imagine playing that sketch today, who would play which part? Personally, I think that if Hazel Blears could be persuaded to shave her head, she would be perfect for the rent man. Answers please to HM Treasury marked “Urgent For Chancellor”.
Posted by Demetrius at 17:08