Cameron And Power To The People 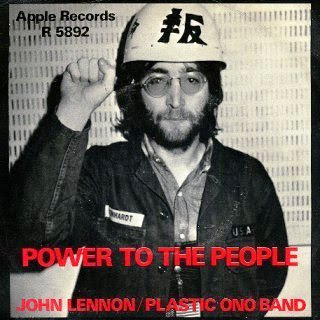 In 1980 David Cameron was a callow teenager hanging around with the guys at Eton, softly singing to himself “The Winner Takes It All”, the Abba hit of the year. Doubtless, as teenagers fixated on celebrities are, he would have been affected by the tragic death of John Lennon. John, a lower middle class and grammar school boy grew up in a nice home on Menlove Avenue in Liverpool, a large comfortable semi-detached property. At least it was in comparison with the accommodation available to the great majority of working class people at the time. Its inhabitants were said to be a snobby lot who had special toilet paper and not the ripped up Daily Mirrors and Sunday Pictorials we used. Life in Menlove Avenue was both warmer and better equipped than at Eton I suspect.

Inevitably, marketing considerations required The Beatles to create the myth of worker solidarity to help them become very rich and buy properties in tax havens. John famously said that “I might have been born in Liverpool, but I grew up in Hamburg”, referring to his life changing experiences in the Red Light district of that town, where so many British Soldiers had surrendered to one or other Reeperbahn Rash in the years after the war. Hamburg originally had surrendered to a water truck driven by a Lance Corporal in 1945, but the next day repeated it to a coterie of more camera friendly troops with tanks and stuff. But Hamburg had its revenge, because in the next decade or so the ladies of the Reeperbahn inflicted an over ninety percent casualty rate on the British troops. This information probably is still classified, so you read it here first.

When both David and John were born, a generation apart, there was still a structure and form of government system in the United Kingdom which could be understood by the general population, and a legal system that had relative clarity and purpose. There was also coverage in national and the then extensive local press.

It began to go bad in the early 1970’s with the badly botched Heath reforms of local government and the health service. The disruption to management and the finance of services played a part in the severe inflation of the period and inevitably led to the decades of tinkering, shuffling, and fiddle. The commitment to the EU added to the mess, as did the creation of a raft of extra government bodies, and the never ending reorganisation of central government departments in the search for media coverage and to keep John Prescott out of mischief.

Mrs. Thatcher made an attempt to prune the Quango’s, but like vines and roses only to create the extensive growth of the last fifteen years. We all know what Blair and Brown have done. So we have a huge mess. After sixty years of interest and study on government and politics, I now have no working knowledge of either the law or just who administers what to what effect, or why. The documents I read are verbal sludge, and the intellectual structures on which law is based and decisions are made are roughly at the level of the playground of the old All Age Elementary Schools.

So David, my advice is, if I were you I wouldn’t start from here. The trouble is that if you do wish to give power to the people, they must have information, a media that is balanced, and an immediacy of access. This is not the way the media works at present and restoring local control will be harder to achieve than you imagine. The organisational challenge is immense, and you are not going to have either spare cash, or real growth to provide it. Worse still, you might have a rate of inflation that has to be firmly controlled to avoid a 1970’s problem or greater. As for the public relations, as things get difficult it may be nasty.

The pop and celebrity culture might suddenly see a market in pretending to be just very ordinary, especially if the tax man catches up with some of them and the screens will be filled with middle and lower middle class media poseurs waving their arms about demanding the return of Harriet, Jacqui, Hazel, Yvette and Caroline. The men will not be available. They will all be in Brussels, or Moscow, or with any luck in Walton Gaol.
Posted by Demetrius at 17:14