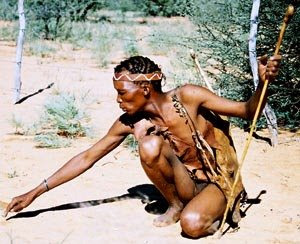 On Sunday night BBC2 started a series on where humanity came from and how. Although fronted by the intelligent and able Alice Roberts, she was given a script of utter banality. The programme was cluttered with the usual clever clogs camera tricks and the nasty ten plus decibel bursts of sound that can damage the ears of the unwary. It took an hour to tell us what we might have learned in ten minutes and spared us the detailed information, hey guys, who needs facts?

Alice took us to the Kalahari and the Bushmen to illustrate the basics of the hunter gather lifestyle. As they trotted along in the fierce heat of the desert she measured their body temperature to see how they coped. It remained remarkably stable in spite of hours of effort, helped no doubt by their physical fitness and lack of fat. But the thesis was that the sweat glands enabled body cooling that made the humans far more efficient predators in severe conditions than all those fur clad cats and others. I sweat therefore I am. What Alice did not mention was the importance of the sense of smell in the wild and that the sweat may have had an effect on the females. As this is a polite blog, up to a point, I shall draw a veil, save to say it all helped to create the next generation.

When watching the football earlier, which of course features other sweaty men, one advertisement had a man, (a banker?) living a busy modern life, kept happy only by squirting large amounts of petro-chemical to stop the sweat glands working, and containing powdered heavy metals to block the pores. As the content of this stuff overcomes and may destroy the sense of smell it keeps the suckers buying. Also it may contain substances that do strange things to the parts of the body that exercise the reproductive function, so the chaps may be able to perform, but without much useful results. So it looks as though modern urban man, often carrying a good deal of fat, could be overheated to no great purpose and useless out of doors.

Alice did not mention in relation to the Bushmen that recently the government of their country have tried to push them into small reservations with concrete huts to allow mining companies a free run at all the mineral resources in their home lands. Like many other cultures deprived of their base, it may well have led to the end of the Bushmen of the Kalahari as a human group, and the end of the last of the hunter gatherers. In the meantime, some of the minerals from their land would have been ground up very fine, and put in cans with stuff to block the pores and stop the sweat of men in the developed world, all in the name of progress and growth.