A Dance To The Music Of Time 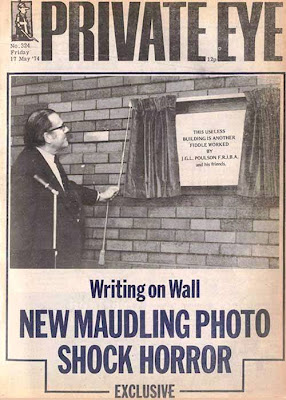 Now that The Telegraph has named Yvette Cooper (and her husband) about property flipping in the Great Expenses Scandal, there is a sense of completeness about the whole mess. Yvette is MP for Pontefract and Castleford, and the former was the base of the famous architect (the RIBA were not too sure about that) and financier, John Poulson, who went spectacularly broke at the end of the 1960’s taking quite a few political reputations with him as it unravelled in the early 1970’s. The Wikipedia entry on him gives the picture fairly well. It does not give the full ramifications of his activities, but does enough.

He built a splendid state of the art house, “Manasseh”, which won design awards at the end of the 1950’s. The cost figure given in the entry is £60,000 to which should be added the free work done as favours by contractors. When it went to auction in the 1970’s it sold for £32,000, despite property prices having doubled in the period.

Yvette in her political work has presided over a major property crash of her own. There are other delightful nuances however. During the 1960’s governments were on a house building spree, and Poulson came up with a design for prefabricated housing. Probably, the concept was good and the demonstration houses were well built, but in Great British style when applied in practice, bad work in the factory allied to slapdash building on site, meant estates of leaky, cold, and creaking houses that later were impossible to sell. One was in Cudworth, famously the birthplace of Michael Parkinson, as he has never failed to remind us on every possible occasion.

Another project was a primary school built for the West Riding County Council, a major client, in Worsbrough. How a new school was built in an area of declining numbers is a mystery. At least it gave Arthur Scargill’s children less distance to walk, and somewhere with indoor lavatories. The problem was that when an outside door was opened all the warm air left the building, so it used quite enormous amounts of coal to keep it functioning.

There was a hospital somewhere where the lifts not only were at the wrong end of the building, but the same size as those in shops, precluding patients on trolleys or beds from being moved. The Leeds International Pool was too short for international swimming. Last but not least was the old Department of Education and Science by Waterloo Station. The lifts often got stuck between floors. In the time of Sir Keith Joseph at the DES it was said that when he was caught in this way the senior officials were inclined to leave him in the lift as he did less damage.

What finally pushed Poulson over the brink was probably his association with Reggie Maudling, the ineffable Chancellor of the Exchequer under Heath. Mrs. Maudling had a huge and costly ambition to make East Grinstead the capital of the ballet world, and Poulson was roped in to pay the price, and it all ended in tears, like most ballets.

When the scale of the corruption and political malpractice across the nation became known there were a lot of people involved and it was said that to prosecute them all would be too costly, too disruptive of the various agencies of government involved, and would seriously damage public confidence. Important names were whispered. But poor Poulson and a handful of soft targets took the rap and did time in gaol. Old and ill he never recovered, and his biography was pulped.

Yet in many ways, in terms of management, finance, and performance, John Poulson is the intellectual progenitor of New Labour, a man whose vision of government has finally triumphed.

Perhaps Yvette should do some work on Local History, she might learn something.
Posted by Demetrius at 17:27