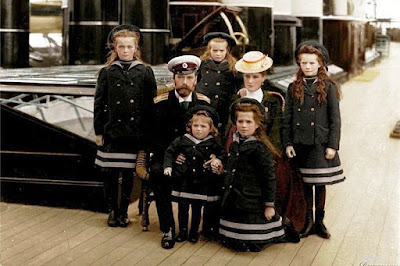 A lady I knew in the past, called Aunty Katy had once done a spell as one of the governesses to the daughters of a Russian Grand Duke of the family of the Tsar's. She wasn't really an aunt, but a single cousin of grannie's and the Aunt a sort of courtesy, picked out by the nuns for higher things because of her gift for languages.

It was her view that the murder of the Tsar and family by the Bolsheviks could have been avoided had the British Government acted to rescue them in time.  It had been the fate of the Tsar that essentially he was the wrong man in the wrong job, something that too often happens with autocratic regimes with inheritance.

Historians may refer to Russia as an enigma wrapped in a riddle, but that simply means it is and has been a very complicated place. Between West and East, with faiths demanding loyalty albeit very different faiths and rulers who are supposed to be autocratic but all too often incompetent it is difficult to deal with.

One feature of the various forms of government it has endured has been the coming and going of factions warring with each other and dangerously carrying on their conflicts elsewhere in the world where they also seek allies. The British Communist Party in the first half of the 20th Century was notorious for the divisions between the supporters of the different elements in the Comintern.

A curse of British government has been the talent of the Foreign Office to pick the wrong side when dealing with other nations. Driven by a desire to be seen to have some kind of influence as well as seeking out the money elements for the various party backers in UK politics we get what they pay for.

Along with these people, nowadays big in money and property and media, come the usual suspects in their train. The fixers, the deliverers and inevitably the thugs and the criminals. When you allow them to operate in the drugs trade for our young ones, launder their money via political parties then nasty things can happen.

The nerve gas poisoning tells us just how bad these people are and the lengths they will go to either in pleasing their masters or playing their own games. Our government decides to react by challenging Russia with empty threats.

Probably, reading the internal situation in Russia wrong they hope for some concessions. They are not going to get them and all they will get is a souring of relations that may make it impossible to deal with the UK situation sensibly.

This will not happen because too many Russians in the UK are putting too much money into too many pockets among our politicians and the financial markets.

If only one or other British naval commander had decided to ignore the Foreign Office and government and rescue the Tsar and his family.

Then we could all be singing.