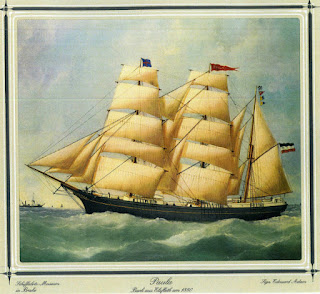 Sometimes, the media has a story comes up which is out of the way and reminds us that our activities around the planet may not be quite the same as we are told.

This story in the www.thelocal.de web site titled "German message in a bottle takes 132 years to be found, smashing world record", is about a lady in Western Australia strolling along the beach, seeing an interesting bottle and discovering a piece of long lost history.

The picture above is the ship from which it was thrown in 1886 and the message inside gives its position in the Far East oceans at the time. The German Hydrographic Office asked ships to report their locations for its research on currents etc. Imagine the sea acting as the broadband of the past.

The part of Germany, Elsfleth, from where the ship came is on the upper Weser north of Bremen. Who were in the crew of the "Paula"? Is it possible to find their families, either in direct descent or related? If any were found in that region they would consider themselves to be German.

But the crew of 1886 might well have not seen themselves as "German" in the sense that we do, because before 1870 Elsfleth was in the Grand Duchy of Oldenburg and separate from the other parts. This history of the Duchy is intricate and complicated with much coming and going of rulers.

The "Paula" was built in 1876, said to be at the Luring Shipyard in Hemmelwarden, possibly one of a number in the Bremen area just to the south. Bremen has long been a major shipbuilding centre. At the time of WW2 it was a centre for submarine building and before then warships as well vessels for commerce and passengers.

The creation of modern Germany in 1870 led to an immediate policy of the new Empire to take part in the colonisation of Africa and the Far East and a major role in their futures but initially by avoiding armed conflict with other European powers.

In 1884 it was a conference in Berlin which parcelled up territories between the European empire builders. In that year Germany took control of much of New Guinea and later gained footholds in China.

He promptly dumped Prince Otto von Bismarck who had headed the government since 1861 and his careful foreign policy for a much more forward and aggressive one. Eventually, he did change the world, Germany turned out to be the loser.

There are libraries full of books about this. But I suggest following the money. This was a period when hordes of men ran round the world digging wherever they could. In a few cases they turned up precious metals and stones, the magic money trees of the times.

It was quite simple, the more you owned of the lands of the world, in theory the better your chances, think Cecil Rhodes. Geology was still in its infancy at the time. Another question was where was the money centre for all this? We had London, but the German's and the American's had other ideas.

Where was the "Paula" coming from and going to on this voyage? What was its cargo? Given its location it could be anything. We might have some surprises.

Meanwhile in the present we have a river flowing through the town. After the weekend it is full of bottles, but sadly no messages and for that matter no gold, you no longer get tuppence a bottle on return.