Get On Your Bike 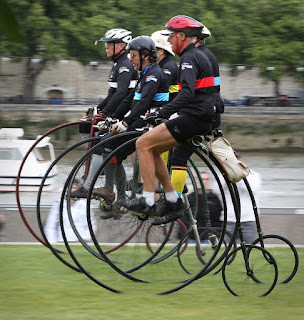 Sir B. Wiggins, late of this parish, had become famed for riding his bicycle better than others. His achievements are to be respected as he has out ridden the best in the world to win races that are both physically highly demanding and require not only individual skills but the ability to one of a team.

Quite why sportsmen and women of this ilk are given one of HM honours is a puzzle. The UK honours system is recognised as one of the most corrupt and questionable in the world, just look at Parliament and the Houses of Commons and the Lords. Sports should have their own honours system, as do some states, with an equivalent ranking in society.

The reasons why Bradley, oops, Sir Wiggins, is now under the cosh are twofold. One is his medication caught between the upper and nether millstones of the rules, or rather the gear changes. It seems he is asthmatic, as are many, for which medication is needed. This under the rules is legitimate.

But as this is cycle racing where breath control etc. is critical, it means that he does not race in his natural condition, coughing and wheezing, but with his pipes cleared. A three week race, such as the Tour de France, or the shorter ones over fewer days demand that the rider needs a clear chest.

So he is damned if he does not take medication but according to some damned if he does. In the meantime in recent years we have been going to a lot of trouble to create the chance for the disabled to take part in sports, one way or another. There is no simple answer to this.

A sportsman's time for fame and fortune is usually a short one. You have to stack up the money, curb your expenses and make sure the right investments are made. For cyclists there are few major areas of media interest in the sport to give ongoing high pay and rewards.

So Sir Wiggins, not having a Ph.D in commodity trading etc. has to rely on others is making sure that his forty to fifty years of retirement can be in comfort and secure. Which brings the tax man knocking at the door, in the case of high paid sportsmen with a big stick.

What will he be advised to do? If they are doing the job they are paid for he will be told to set up a series of business arrangements based in places with low tax regimes.

Some may be islands you could ride a cycle round in a couple of hours or so in hot conditions. Another may have a lot of mountain passes that would make any cyclist wince and do in the cycling season.

The rights and wrongs of this, currently a major debate, lead to people suggesting that Sir Wiggins shrug his shoulders, cough up to the UK Treasury and fork out at the highest rates possible.

Think of the benefits that would give. It would pay the expenses of the members of the House of Lords, all those financiers, for up to several days.

Must go, time to call for a taxi.