A Rock And A Hard Place 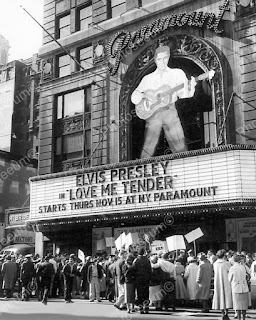 The picture above is of Times Square in New York in 1956, when Elvis Presley was a major star and the rock and roll generation were being created by the media of the time. Sixty two years later they have not gone away.

If you search the TV and radio channels there are numbers of them devoted to the various pop stars, bands and production and those that came along later. It seems that many of the followers of musical fashion at the time are still plugging in their hearing aids and cleaning their spectacles to tune in nod and shake away.

Go back another sixty two years, see Music in 1894 in Wikipedia and you are the very beginning of recorded music and the first moving pictures, silent for a while to come, might be seen. There are no channels for these or for the music before from the period, the originals are lost and can only be restaged, if that.

But the activity was there and on a large scale. In the towns, notably the bigger ones, there were an astonishing number of theatres and halls where the different kinds of music and musical theatre could be seen and enjoyed, You could buy the paper music etc. for your own home, but that was expensive.

It is very like the divide you have been a period when some documents and materials have survived to give a partial reality to their past and the other periods where the best you can hope for is the archaeology and a few scraps of written material. You can try to recreate on the evidence you have but this is theory.

Even then we have to be very careful. What we are told was the life of the sixties and seventies are very much what the media at the time liked to describe it and how they wanted it to be, mostly because that is where the sales were. For most ordinary people, life was, well, ordinary.

Meanwhile, as we are so busy as all that we may not have noticed that a lot of our music and entertainment seems to have entered a period of stasis, only flashier, noisier and more shouting.

One of Elvis's songs in 1956 was "How's The World Treating You" which did not make it to the top and is now forgotten. But we can see it on Youtube if and when we want.