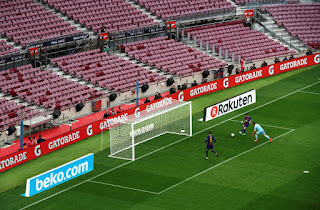 You may or may not have noticed but there is another soccer World Cup due to begin in June. In the UK and around the world our leagues have been disrupted by the intrusion of "friendlies" in which sides who have qualified meet sides who have not as preparation.

One way or another you are paying for most of it between the TV service you use, the purchases you make from firms that do so much of the advertising and sundry ways and means. The grounds, players and anything that either moves or is still is covered with advertisements.

Recently and worse, sport TV now has pop up advertisements frequently flashing across the screen at most if not all slow or static parts of the coverage. The button I reach for is not to buy but to switch off before putting some soothing music on the CD.

The football has become routine, predictable and so boring and the commentating exploring the furthest shores of idiocy. So the sound is off and the music on even if the sport is on screen.

The first soccer World Cup was played in 1930, with two more before WW2 with limited numbers of entrants.  When it began again in 1950 and entrants increasing with air travel available it became bigger and more complicated.

So it began during a period of strong nationalisms and continued in the second half of the 20th Century on a national basis with the teams being substantially drawn from players in their own national leagues.

By and large the national teams were better than the individual teams in their own home leagues and the standard of football reflected this.  When watching a World Cup game you were looking at the best playing the best in general.

In the 21st Century as a result of the globalisation of football, ease of long distance travel, the impact of finance from satellite TV and major corporate sponsors, there is a very different situation.

There are particular national leagues, notably in Europe, where the clubs have substantial squads of foreign players paying top wage prices for the best players they can hire from anywhere in the world.  There has been a concentration of these players in Europe.

For the crowds and TV audiences now the best football to be seen is not an international match featuring your national team, it is a match between elite clubs from the national leagues playing either in their own league or in one of the plethora of international competitions now in existence.

It is arguable that the day of national teams playing on the basis of nationalist interests is now over and it not just secondary, but actually an intrusion on the real business and purpose of football and a costly one at that for the taxpayers. The way things are going in Brazil, if anything, seem to confirm this.

The trouble is, as ever, the politics.  There is not only FIFA and the rest installed as relics from the past there are politicians anxious to show off at prestigious international fun fests of one sort or another.  They are very happy to spend the taxpayers money on these bun fights.

But when a World Cup finals group match turns out to be more boring and worse football that you could see at a routine English second grade Championship match between teams with international squads it does raise the question do we need the World Cup?

How do we get rid of FIFA and its monopoly power?

Now it is more how do we get rid of football?