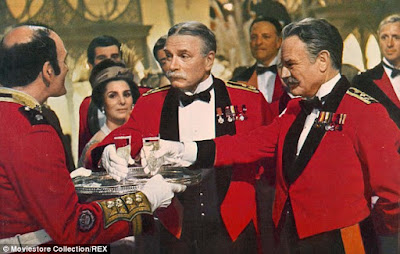 Around the many film channels today are some that show ones from the past. They can take us into two different worlds, one the period in which the film was set and the other in which it was made, both very different from our own today.

"Oh What A Lovely War" was screened in 1969, an adaptation from a 1960's stage show and dealt with World War One, another fifty years back. It is one for me to watch because a friend of my early teenage years was Joe Melia who starred in the film.

It still causes debate and disagreement. A vigorous and bright colour film it hit hard and was intended to, albeit without the kind of sex and violence on display and thought necessary in our modern films and drama.

In the 1960's what was current was the Vietnam War, a Cold War where the rockets were kept ready and the East German border under careful watch. In London, PM Harold Wilson was feinting and dodging to avoid being involved in any major conflict.

One of the features of the film was the way in which men signed on for the new Army, seemingly volunteers fooled and persuaded by the propaganda of the period. But in 1914 it may not have been so simple.

This was a time when a high proportion of the male population were labourers or workers in factories who were as often as not laid off for periods, especially the winter.

The Army offered regular pay, food and clothing. With the promises of a war that would soon be over, especially when the German advances had been stopped. There would be many who thought that it would not be a long war.

The film was true for some men of WW1 but not all of them. But the lesson half a century later was that wars were easy to start but often hard to stop; they cost more than they were ever expected to and in many different ways.

Half a century further on we do not seem to have learned much.