Money And Tax Made Simple 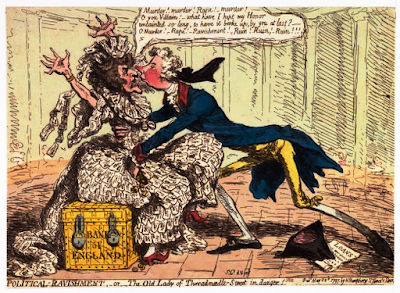 This arises from a comment made on an article about taxing wealth, a subject of bitter debate across the political and economic board. A major problem is that wealth now, that of not so long ago and that of earlier times are not the same. So how and why to tax it becomes more complicated.

Essentially, at one time a great deal of wealth was static. Think of the landed gentry, the buildings and the gold, silver and the rest in the great churches and adorning the rich and powerful, as well as sitting in the cellars of the Italian bankers.

Then as merchants and adventurers ventured across the world up to the 19th Century and through to the 20th it became movable. Hence the drive to Empires with the aim of moving as much of theirs as you could to become ours. In Europe it was at the root of many of the wars, which certainly moved a lot of it about.

In recent decades with the rapid development of communications technology, money creation ideas and globalisation it is fluid, now you see it, now you don't as it moves around the world faster than the time taken to fill an inkpot in the old days.

We have gone from static to movable to fluid yet the philosophies of economics etc. as they are translated into taxation policies are those essentially of one past or another. We have not yet come up with a set of theoretical economics that can cope with fluid monetary wealth in the global context.

Marx was a mid to late 19th Century man who saw wealth as essentially static and so to be shared by and with all while around him the banks were going broke as they learned about movable wealth the hard way.

As the ups and downs of this continued to plague economies for decades we come to Keynes, a brilliant man and mind, who tried to advise us how best to deal with this. The politicians as ever, preferring the easy and popular bits to the difficult ones, made a mess of this on the whole.

Meanwhile the techies in the attic were playing games on the new machines they were inventing and began talking to each other over the ether.

It was not long before the bankers who dealt with their accounts, invariably in the deepest red, realised that just as the techies could control Mario The Plumber worldwide, they could control money flows and holdings.

The rest is history as we try to understand what is going on out there.