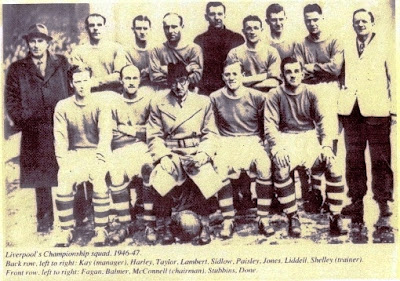 In the football news it has been announced that the English Premiership clubs will be given a lot more money next year for doing the same thing.  There will be no organisational changes.

They will still have eleven on the pitch, substitutes on the bench, the game will still last 90 minutes to much the same rules.  In short the earnings do not relate to any increase in productivity, improved lengths of service or requirement for efficiency.

One has to allow that the clogging and fouling these days is much more skilled and professional than it used to be, the players are far more emotional, which is good viewing for some and it is expected that they will be a lot more sober when they take the pitch.

All is not entirely well however.  The sponsors of Manchester United,  club located in a northern city close to the site of a former engine shed from whence the club derives, feel that the team ought to be more attacking like their predecessors who won so many trophies.

There is a general feeling that the style and the way the game is played typically these days is less attacking, albeit not short of aggression in general violence and disputes with the officials.  It maybe that the technical wonders now applied to analysis has produced an overload of information with adverse effects.

One is the measurement of pass rates, successful or not.  A player who makes a lot of passes that "succeed" may well think that to go for an easy no risk pass that is a plus is preferred to riskier forward passes into the hearts of the opponents defence more of which will not "succeed" and be a minus.

My view is that in general what has happened is that the scientific analysis now available, the higher skills of players and the closely controlled training, much improved organisation and fitter players now mean that defences are far better and harder to beat.

So, as I gaze between my feet at the box, sound off because music on, it is a lot less interesting.  Alpine skiing often has good scenery, golf is green and nobody is bashing anybody, other sports have their moments.  If I want violence there is always the rugby.

Is it possible that the football bubble could burst?  There is a lot of bad news coming out of the international bodies, the actual games are more often a bore than anything and we have had an overload of choice for a little time now.

Could there soon be too many competitions chasing too few viewers and the sponsors looking at best value other than football?
Posted by Demetrius at 16:47