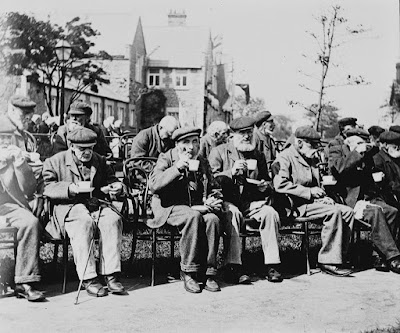 Like the weather the net can get rough in unexpected and unwanted places.  There has been conflict between two sites I look at quite often and it is a pity because the subject in question is important, difficult and affects very many people, namely old age pensions.

Look at it here if you are interested.  One is the blog by Frances Coppola coppolacomment dot com and the other The Slog by John Ward at hat4uk dot wordpress dot com and what it tells me is that the subject is a minefield that can trap anyone.

To get away from the dispute and back to the subject, which is how to adjust and amend the state old age pension (OAP) scheme to take account of modern life and living in terms of what can be managed financially.  I confess that I find all the ins and outs at present difficult.

In 1947 when the Attlee government launched its extended version for all I would agree that it was optimistic to say the least.  Promise now, pay later is one of the fault lines of our democratic politics and in the case of OAP a guaranteed large scale vote loser if hard decisions were ever to be taken and any problems addressed.

But it was and is not just the OAP it is also a feature of many pension schemes, private and public, that promises and pensions of one kind might well become very difficult if trends and obligations out ran payments in, if funded, or estimated costs, if unfunded.

Again what was typical was that when many schemes were created the key data on which they were based were figures or estimates from the past.  As the future unwound it became often the case that these were either in accurate or in fact a bad basis for estimating future liabilities.

One feature was that at the outset what was not thought of was the implication of allowing early retirement schemes for many that often tipped the balance or in the case of OAP large numbers leaving the labour market early or joining much later.

All those students and older pupils do not pay national insurance or much in the way of taxes at one end and those age groups in case being smaller than anticipated while at the other end lives are much longer.  There are other things but this problem is going to be with us for a long time and the one certainty is that it is bound to be an issue in which anger is at a premium.

There is no easy or popular answer.