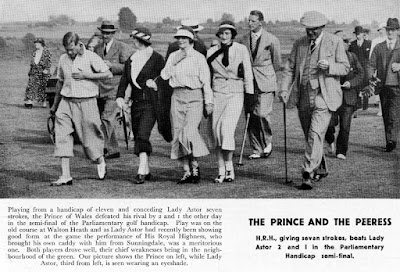 Today, 7 January, The Automatic Earth did not post a set of links but put up a single article titled "China, Oil And Markets: It's All One Story".  Not too long and readable in clear prose.

It is here and you may or may not agree.  If the writer is right or even only half right we are in for another rough ride and the drivers have lost control of the steering.

In the meantime one item of big news is the coming TV programme about the late Her Majesty Queen Elizabeth, The Queen Mother and the late Duchess of Windsor, Wallis Simpson, born Warfield.  The headline in The Mail said that the progamme suggests they were rivals for the affections of King Edward III or third.

He died in 1377, but Elizabeth was born in 1900 and Wallis in 1896.  I know that theories about people living many lives are in favour at present, but this seemed a little improbable.  But I was reminded that perhaps The Mail meant King Edward VIII or eighth, confirmed by a later change.

They both lived long lives in which near halves of which were a kind of detached existence from what might have been but apart from what was.  So we remember them mostly as old ladies with their respective eccentricities.  I think the programme is fiction and Edward's attentions elsewhere are well known.

Had King George VI lived thirty more years, we might remember Elizabeth as one of the great Queen Consorts of history.  Had Wallis been able to ditch Edward and later play a full part in the war effort she may have achieved another status altogether.

It depends how we see things and this article by Monica Threlfall asks questions about how youth unemployment is measured.  If she is right all those figures we are being given are open to question.  Given the serious doubts now about almost any official figures from anywhere it is difficult to know what to think.

Which takes us back to the article at the top of this post and what is happening in the markets.