A Trillion Here Or There 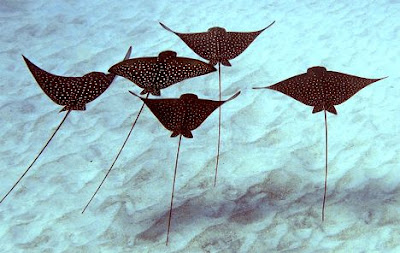 The BBC1 programme on The Trillion Pound Island about the Grand Cayman, still on I Player, if interested, was one that was very irritating.

Noisy, an severe attack of "presenteritis", a yapping posh bloke, meeting very important people who said little, flirting with sting rays who might have helped by stinging him, and condescending to the viewer and the lower orders, missed all the real targets.

It managed to make the business of tax avoidance glamorous and desirable while leaving us to think that all we have to do is abolish them to get the money to stave off austerity and avoid all the very difficult issues and decisions that need to be made for our futures.

One minor clip may me wince, heroically going up to the window of a large office block in the middle of town he fled crying "there is a big room full of desks, they are all empty" giving us the impression that the Kraken had been in town.

Doh, the building is full of new computing systems and the one time clerks etc. are all gone and part of the lost middle classes.

A large intelligent security man who had my every sympathy asked him what he was doing but did not get much sense.  Instead of talking to high up's like the Governor, a British Government stooge, and the Prime Minister, and mostly very rich people he might have asked others such as those in Britain affected by all this and the actual menial low wage people on the island.

Tesco was mentioned, so what about one of its suppliers who have been unable to extract payments?  Barclays, also, how about one of the many business borrowers who have been ruined?  Manchester United, so here am I, after a life time antipathy, feeling for their fans who can no longer afford to go to games.  But who were not mentioned?

HSBC, does the B now stand for "Bent"?  Deutsche Bank, forecast to cause the next big crash and owner of a huge number of UK freeholds of leasehold properties and stinging them rotten?  UBS, well I never.  Last but far from least Goldman Sachs, the Vampire Squid itself, allegedly.

The tax haven history, inevitably, is a long and complicated story.  You need to know about Lord Cameron Cobbold and Sir George Bolton of the Bank of England in the 50's and 60's.  This was a high tax age and in foreign affairs the American's were in charge and the Caribbean was in their back yard.

These were people who regarded themselves as New Age "Merchant Adventurers" destined to restore British leadership in world trade and finance and most of all prestige and the primacy of the City of London in economic and financial affairs.

Well, we know what happened next.  Another matter is what is the "now" exactly?  Both The City and the world of finance and banking is very different from what is was and is still changing and not just because of events in the last decade.  Looking at Switzerland, for example, once home to a network of private banks, they are now down to a handful in number with recent failures.

The programme did mention that Grand Cayman was still marked by the legacy of Hurricane Ivan of 2004 when it was one of the hardest hit places, low lying it was swamped by high seas.  The hurricane seasons have been quieter recently, but there is always that risk.  The Islands are close to the Grand Cayman Trench, with its several dormant/extinct (?) volcanoes.

But it will not need a major geophysical event to cause big trouble.  The real problems lie in the whirring high powered computers in the office blocks that dominate the landscape.

And not even the polite security man can do anything about it.