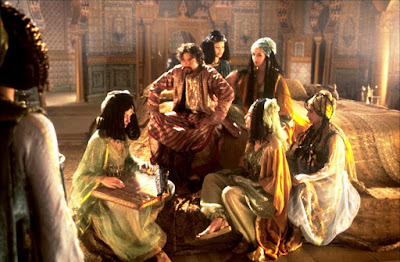 An unintended consequence of revisions to benefits policy is that those who enjoy multi partner marriages will now be better off.  Burns Night is upon us, so every true Scot, if there are any left, will find a reason to eat and drink.  Of course, time and tide move on so the past is no guide.

It is a question that if the Presbyterians and the Episcopalians had embraced polygamy in Scotland after the Reformation, his life might have been much less complicated and difficult.

Perhaps given the changes that have occurred and those which will happen it is time to revise some of the details of the festival to allow for both the present and the future.  The first issue is, of course, the haggis.  That which was the pride of my ancestral fleshers of Ayr must go.

Vegetarian Haggis was recommended by the Wee Guardian of Faringdon Road, London, last year. It should meet most, if not all, the requirements of the various diets allowed to the peoples of Scotland and beyond.

After all London is no longer a British city and all the Scots that once were there are no longer owning up to their origins.  The tatties should be boiled down to a mush that can be eaten with the fingers but it may be best to replace them by a nice dressed salad.

Then there is all the other business of The Night.  There are regiments of the Indian Army who have fine bagpipers should there be not enough Scot's these days and using a laptop and the web would be a step too far. Also, Skinner of Skinner's Horse was of Scots origin.

For the poetry, perhaps instead of the well worn Burns there could be extracts from The Shahnameh of Ferdowsi (various spellings), preferably the part Turner Macan edition of the 1820's in the original Persian published in Calcutta.

This could be along with tales from the Arabic version of the Arabian Nights picked up by Macan during his travels in Egypt and later used by Richard Burton, the explorer.  Macan is an ancestor of the present Earl of Home and his wife, Harriet, had a Nesbitt grandmother, so that's alright then.

Of course there would be no alcohol, perhaps coconut milk laced with strong spices or some fruity soda water or even hot cocoa.  It would make a change.  Here's to the future!