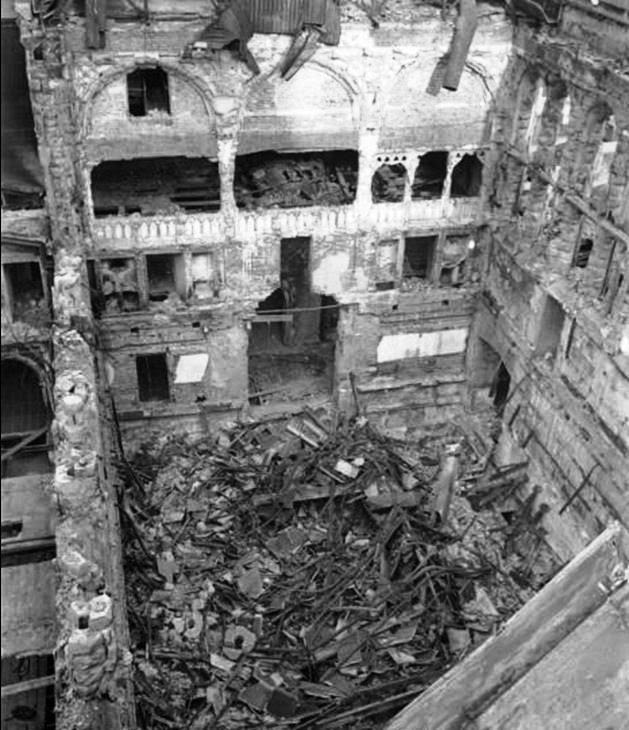 One of the joys of the internet it that it has become far easier to make connections that would not have been possible in the past or only by great effort or long research.

There are two items in the last couple of days which offer some interesting possibilities,  One is the cost of restoration at the Palace of Westminster and the other what to be done about certain of our incoming migrants who are less welcome than others.

The Mother of Parliaments is going to seed and will need not just cosmetic work but full scale surgery in detail.  It is priced at £3 billion, not including all those tasty secret expenses that its present occupiers will demand for their minor inconveniences if the work is done.  The 1941 picture above shows that much of it recent in any case.

In our modern, wired up and joined up age, do these people need to be in the middle of London at all?  Could a move hugely cut costs, provide more space and better facilities and go to a place where clear economic benefits will arise from a large injection of public funded activity offering a range of high paid and varied jobs?

Here is a good property which offers all the potential.  It ticks a number of boxes.  It is in the North and in a former mining district. The land is much cheaper, local property prices could do with a boost, etc. etc.  Also the buildings could be kept down to the large basic open plan sheds for much of the work with designated other areas for specific functions.

It would set a striking example of UK consideration for its tax payers in contrast to the many and various over blown arrogant buildings recently put up elsewhere.  Also, it would end the British identity of the past of Empire and conquest seen in all the old films with their shots of Westminster as it was.

The site could be levelled and to put uses for a modern age that would reflect our new and global status and our rulers intention to be the servants of others rather than demanding service for ourselves.

The art work and statuary could either be sold off or put out to museums.  The archives could be shredded to remove the taints of our past, or sold off.  The stone would make good hard core for social housing.  After all, some of the present users of the building are familiar with hard core.

Among the many and various migration issues that now loom large in our politics there are radically diverse views about what should or should not be done.  At one end of the debate there are those who assert that all should be welcome and we must learn to enjoy the many and various contributions they might make.

Putting out the welcome mat is the theme of this article from the LSE website.  Anca Puska is saying we should give a cautious welcome to all the Roma peoples and argues that the UK is likely to fare much better by working with local support groups to ensure migrants are aware of their rights and opportunities.

The Chairman of the LSE Board is Peter Sutherland, who believes in open door migration, and Cherie Blair is a governor, again a believer in unrestricted movement, if only to boost the rentals of all the family properties.

If Labour win in 2015, it is unlikely that they will do much to restrict incoming peoples and may well see the Roma as becoming the standard bearers of our new proletariat.  The site in the middle of Westminster would be ideal as a welcome facility as many of the social and other services will be available.

There is a large park nearby, St. James, that could be earmarked for use as well as spaces for vehicles, the Square, Horseguards, Trafalgar Square etc.  Other large Crown or public properties in the vicinity also could be requisitioned.

And the Abbey could be stripped out of its old stuff and used for stabling.