Downton In The Doghouse 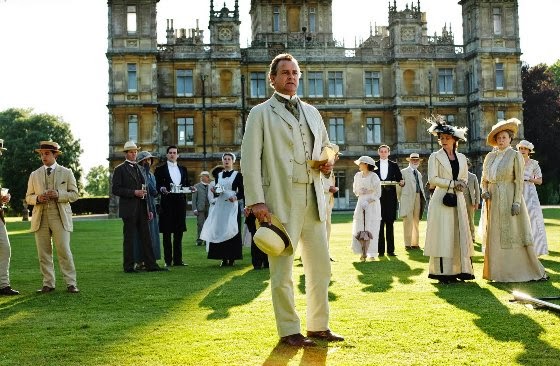 This leap into the steamy waters of TV soap; the one about Downton Abbey, is sparked  by an article on the Mises Institute web site.  As many viewers have decided opinions of one sort or another of programmes it is always risky if a stick is poked at the detail or the souffle shaken and not stirred.

That Downton has a dirty secret is argued by Mark Thornton.  It relates to the place where the TV programme is filmed and its history.  That he is talking about high finance rather than who does what with who will disappoint  many but that's the way it was.

In the media there has been a debate about the personalities of those depicted in the programmes, their apparent ordinariness or sometimes hapless lives that many do not accept either for noblesse oblige or the ideas of the left about their oppression of the masses.

For my part there is certainly something missing that was important in the late 19th and early 20th Century, a regular feature of most of their lives and activity, which is little recorded or recognised.  As well as the central nature of field sports and Freemasonry  to the upper classes of that time there is another thing forgotten.

This opinion arises as a result of a good deal of time spent poring at  digitised newspapers recently made available.  In the past you had to go to the archive, say Colindale for the British Library, and turn page after page in the hope of spotting an item, easily missed buried in the close type.

Chasing names, once looked at, inevitably the eye runs over the rest of the page.  The papers then would give long lists of names of who were at this or taking part in that.  If you are able to see the pattern and realise what was entailed it gives a fascinating insight into people and society at the time.

One feature that struck me is the large number of charitable funds and societies, events and other things that were given major free publicity.  Before the Welfare State it was  the Poor Law or the Friendly Societies etc. or the Charities.

It is clear that for the Aristocracy, the upper classes in general and for all the local worthies  charity work was not an option, but a given and integral to their status, function and place in the social structure and this applied from the top, The Royal Family, down.

One way or another they were expected to be there, to contribute and to lead and from the evidence of the listings it was a necessary part of their lives and I suspect many saw it as Duty.

One example will serve.  A bazaar held for the Royal Hospital for Incurables, patron the Monarch, had thirty stalls run by ladies.  All were either Duchesses or Countesses who would be assisted by other members of the upper classes.

So, for example, the grand parents of Mad Frankie Fraser, who died this week, recently arrived from Clydeside and needing perhaps ornaments for their mantelpiece could claim to have been served by a Royal duchess, or a Countess high in society at least.  Or if they had more to spend, a family christening gown.

Clearly, the problems of poverty, inequality and life at the time were far greater than the work of the charities could deal with.  Also the Poor Law was last ditch form of provision and while the Friendly Societies did a great deal of good work, they were only voluntary and not enough.

Moreover, in the late 19th Century the returns from the land that supported the Aristocracy had begun to decline in the age of Free Trade and many of them saw their wealth diminishing.  Also, large families with younger sons and daughters to provide for made its own impact.

With the benefit of hindsight and what we now know, that class as it was on the way down and badly damaged by the First World War, but it is a pity we do not recognise, or do not want to see that in many ways they were different from what we are now asked to think and believe.

But I suspect that a TV soap may not want to look at incurables, the insane, the rescue of the depraved and deprived, the widows, orphans or maimed.