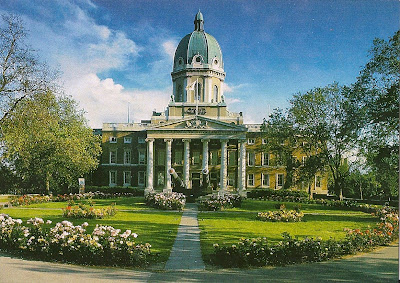 The media is going at full throttle on the subject of war and wars at present.  It reminds us not simply of the past but what we were and more important what happened to many of our families and their communities.  Going back through the generations there have been men in uniforms in each one of them in my case.

At the front of all this are our politicians striving for the right photo opportunities and uttering the glib rubbish served up by their spinners and vote counters.  There are times when I feel like chucking a NAAFI rock cake at them, but it would probably just bounce off.

Buried in the fine detail however of the government's plans for expenditure is slashing cuts in the budget of the Imperial War Museum.  Because in the past it was told to go out to the provinces the tourists have not followed it.

In London it is now more for those with specialist interests and off the itinerary of all those from distant parts who are more interested in where the celebrities go to eat and drink.

Crucially, however, the Library, which is at the heart of the Museum's basic work, preserving both collections of unique primary sources together with literature unobtainable elsewhere, is to be broken up and sold off.

This would fetch the equivalent of the cost of a platform at one of the lesser HST2 stations or five yards of a tunnel.

It is more difficult to cost the joint expertise of the staff who would also go and could not be replaced.  Also, lost would be the chance to digitise and maintain all their material or keep it in good order or to be accessible.

It is wanton destruction and almost a deliberate laying waste of a major part of not just the national history but that of so many.  But perhaps it is what lies behind the memory of all the conflicts and wars that is behind government thinking.

That is the wars were started by politicians and then left to the ordinary man to deal with.