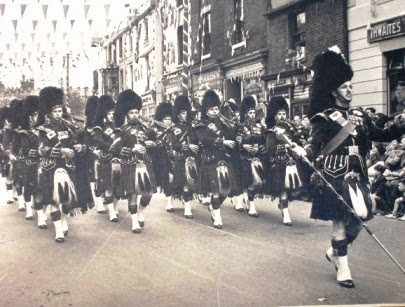 It is Burn's night on Saturday with the usual festivities.  The plans went less well at Highgrove in Gloucestershire, home to Charles, Prince of Wales, where the bash at £135 a head drew no takers triggering a price cut down to £55.  Even this seems a lot for haggis and neeps and a dram or two.

But he who pays the piper calls the tune. Somehow, Highgrove does not seem to be quite the right place for a recitation of "Tam O'Shanter, A Tale.", even if a free opportunity to talk to the trees might be on offer.  The celebration of Burns will be world wide, notably in the USA, where those of Scots descent are still numerous enough.

As small events are often the triggers for bigger things it gives scope for debate about which might or might not be.  For my money when a Nesbitt family was among the first European settlers in Kentucky this was the beginning of the end for the First Nation people's hegemony over the rest.

They called the territory Ayr County after their homeland.  So another option of history could have been Robert Burns going West to become an American pioneer as opposed to a literary one. It is fascinating to think of what might have been if Burns and Daniel Boone had got together.

Burns had at one time thought of going to Jamaica as an overseer.  Quite where and to work for whom is a question.  Could it have been in the Trelawney Parish?  There were plantations owned by Scots families.  He went as far as Greenock on The Clyde and then wisely gave up the idea returning home.  Greenock has that effect on some people.

It was very hard in Scotland at that time in the aftermath of the major 1783 Icelandic Laki Fissure eruptions which impacted so badly on agriculture and its associated economic activities for a number of years afterwards. Burns finished up as a public sector worker in The Excise, essentially a travelling tax inspector, a job which gave him some interesting perspectives on human nature.

The picture above is of the Accrington Pipe Band, some sixty or so years ago.  Then very many towns and cities in England had a pipe band provided by their Scottish community, but no more.

Essex was especially strong, having taken in a lot of Scots migrants.  Many of today's Essex girls are the grand or great grand daughters of Scots who worked on the land and in the factories.

They will have forgotten this heritage, though, Saturday will just be an ordinary weekend boozing opportunity.  And I doubt whether there has been a mention or hint of Burns in their education.  He is lost to all of them.


But I hope to be passing his statue on the Embankment on Saturday and will raise my cap to his memory.  The dram or three will have to wait until we get home as driving has to be done.