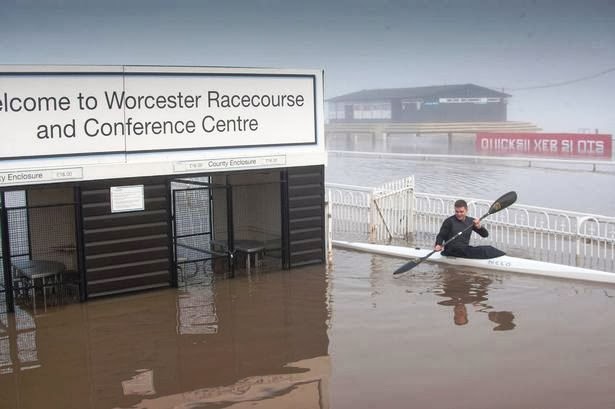 In his own blog, in The Guardian of 13 January and The Sunday Mail today, Sunday, George Monbiot has discussed the recent flooding and argues well that much of the present travails are man made.  As so often the policies and regulations of the EU, the European Uncommunity play a major part.  These are made worse by the inadequacies of the Agriculture and Environment Department, DEFRA.

In Westminster, DEFRA is not one of the top posts, dealing with things we take for granted, such as food, water and the land.  Most of its work is an agency function for the EU and other international bodies and internal agencies, to whom it is happy to allow the dirty work to be done, much in the way that a rich landowner or land corporation leaves it to the tenants.

Politically, if anything, it is a backwater, to use a word, where those who run it are usually going nowhere and often going or have gone out of favour.  It is also almost a part of the job specification that the less you know about the relevant work the better.  Labour had Margaret where my caravan has rested Beckett who did not lose the plot but never realised that there was one.

The present boss, Owen Patterson, is on course to make Margaret look like a top graduate from the Royal College of Agriculture.  But the Monbiot article sticks to the point he is making, the flooding and how what happens upstream and in the headwaters are critical to the amount and nature of flows down river.

He is careful not to extend and complicate the debate in order to avoid complicating and extending the issues.  He is right to do so and barely hints of a broader, long term and more difficult set of policy problems, those involving our water supplies for the future and in the long term.

We have had in very recent times, not simply flooding when there are wet spells, but actual water supply shortages and risks where there are long dry spells.  What this means is that for some time now the overall management of water supply and what has to be done and how has been on the political back burner.

If a major crisis does occur it is not something that can be fixed short term, or covered by importing in a hurry and at great cost.  We could be in real trouble.  There would not just be the disruption to industry and commerce.  Given the fraught state of many urban areas there are real risks of violence and failures of social control.

The existence of clean, generally available and ample water supply plus drainage is very recent in our history.  It was not until the late 19th Century that is came to our urban areas and in some rural and other places as late as the mid 20th Century.  I grew up with people for whom the water supply was a modern miracle and married in a village still without main drains and on a main road.

Now it is all taken for granted and assumed that it is something that takes care of itself or is left to a few experts to deliver. Meanwhile DEFRA encourages the maximising of immediate run off of rain water and the government does little or nothing to deal with storage, supply maintenance and increase while wildly promising to build millions of houses for the many millions more in the UK who expect as much water as they want at minimal cost.


In general most of us resent actually having to pay anything for water supply, I mean it falls from the sky doesn't it and we do not want it in our own back yard.