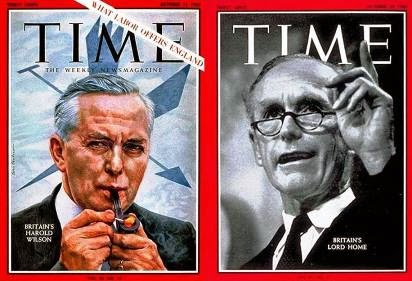 Recently there has been more doing about best and worst Prime Ministers.  It is not a simple matter.  You have to look at what was going in their time, what challenges there were, how they were managed and then the outcomes.

As so many issues offer options in which there are no "right" decisions, only ones with apparently less problems, it gives plenty of scope for debate.  All too often, of course, events and the out turns mean that the option that looked the worst would have been the best choice.

Back in the summer of 2010 I took exception to Sir Alec Douglas-Home being slated for one of the very worst.  At the time in 1963 I thought he was not a good choice.  But with the benefit of the years, hindsight and a lot more information, my view changed radically, so I repeat:

"Apparently, in a poll of a number of historians Sir Alec Douglas Home, who had been the 14th Earl of Home before disclaiming his peerage and becoming a knight when appointed Prime Minister in 1963, was voted 11th out of 12 (the last being Eden) and therefore one of the worst two Prime Ministers of recent times.  I wonder who these historians were; perhaps they should have had a closer look at the detail?

As someone embroiled in the Suez Crisis in 1956 I can agree that Sir Anthony Eden deserves one of the lowest listings although he involved us in only one bad war unlike Blair and Brown.  His health problems as well as his temperament meant he should never have become Prime Minister.  It was not simply bad succession planning it was the total lack of it.

In dealing with Sir Alec, however, he is one of the very few leading politicians about whom sporting metaphors can be used with any truth.  He played cricket as an amateur for Middlesex and the MCC in an era when there were many fine cricketers in the game, professional and amateur.

He was never an academic or needed to be.  His devotion to cricket and other sport did not go well with high honours given the time involved.  Nevertheless, Sir Alec became one of the reliable work horses of politics.  He was trustworthy, knowledgeable, astute and unfailingly courteous.  Given a job to do he would do it.

Also he had contacts in all classes and always knew a good man to talk to.  Running a major estate requires skill and The Borders had a range of key Scottish industries that related closely to the local agriculture and economy.

Essentially, he played a straight bat, was a good man to go in when the wickets were falling and as a stock bowler kept the opposition’s runs down; which is precisely why the Conservative’s put him in as Captain of the team in October 1963.

It was when Harold Macmillan’s government was scoring ducks and Butler looked to be losing his nerve again, as he had done in 1940.  Douglas-Home took control and made them buckle down in the field, bowl tight, and dig in behind the crease.

Macmillan had been betrayed by the Profumo scandal and had mishandled the issues involved.  He had suffered rejection by De Gaulle over Europe.  His Cabinet was in increasing disorder and the economy was beginning to blow fuses after his 1958-1960 spending.  The Right were in anguish over the loss of Empire and world status and the Left were mesmerised by the Soviet mirage.

The Centre had grasped at Keynes ideas from the 1930’s to give some sort of basis of policy but had not realised that in the context of the 1960’s the changes in structures and money systems meant that inflation and other disruption were the consequence.

Amazingly, Douglas Home got his team back in the game.  They lost the 1964 Election by very little when in 1963 it seemed that the Conservatives could be looking at another 1945 wipe out.

Labour took 317 seats with 44.13% of the vote and the Conservatives 304 with 43.40%, the actual margin being only 203,000 votes overall.  A little more time and another Budget and Douglas Home could have won the election.

He did this despite being on the end of personal media vituperation and nastiness that was almost unparalleled in modern British history.  The BBC was taking a terrible revenge for the Conservative decision to allow commercial television to compete for audience and attention and compromise its monopoly.

What he did lack was a pretty face, media experience and a salesman’s manner.  His slightly shy, brusque, but determined stance echoed Attlee’s but this was now the TV age and Douglas Home was far from being the camera’s friend.  Attlee was lucky to have missed TV.

Also, the age of the gentleman amateur was departing.  When Douglas Home said with a wink that when trying to work out economic issues he used a box of matches it did not meet the age.  Probably, he knew a lot more about practical affairs than most.  Wilson played the expert technocrat and his party played their parts in this way.  They claimed that they knew how things worked and so how to manage them.

As a statistician Wilson was fascinated by all the charts and lists of figures.  The snag was that most of them were unreliable and needed analysis and careful thought.  Wilson and his followers did not do that; they did decisions on the immediate figures.  We all know where that kind of approach can lead us.

In the out turn Douglas Home’s matches may have been a better guide to working out economic policy given the catastrophic course of the Labour administration of 1964 to 1970.  He had only a year and never had the chance to be a Prime Minister in the full sense of the term.  His worst mistake was to promote Edward Heath but it is likely he had little option.

He did not get us into bad wars, he did not break the economy, he did not ruin half the population, he did not provoke a boom bust, he did keep us in touch with world affairs and he did maintain a decency and balance that we have all forgotten.

After he resigned the Conservative leadership he returned to be a very capable Foreign Secretary under Edward Heath.  There has not been a better man since.  So we could never vote him one of the best Prime Ministers, but he was far from being the worst.  Given choosing Sir Alec Douglas Home as Prime Minister against some of those since or before, then I would vote for him.

Certainly, I would be happy to see him at the other end of the pitch if I came into bat as last man in with ten to win, an hour to play and a failing light.

Not least, he was a Borderer of Nesbitt descent."


If only he was available now.