Booting Up The Memory 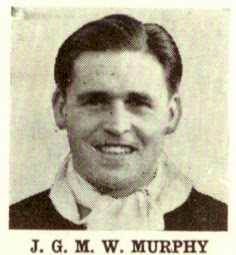 It was a wet winter in the 50's, not as bad as the present one but the clouds and rain seemed to be ever present.  We had a fixture at Woolwich against an Army College side at the Artillery Barracks and it was going to be in steady rain with a stiff cross wind and on a very heavy pitch.

After the kick off we had a promising line out near to their 25. We had good ball out to the fly half and he put a kick into open field close to their line for us to have a go.  Their full back was too quick, just plucked the wet heavy ball out of the air and belted it sixty yards down the pitch.

This kind of thing carried on.  Any time he was near a ball he kicked us all the way back.  When we did get a break he was not just hard to beat but simply too fast. When he had the ball in his hands we had to be quick to cover and tackle.

It was not the regular plodding back in constant retreat against the other side, it was turning into a rout.  Very soon we decided to close the game down as our forwards were equal to theirs.  So for the rest of us it was a long cold wet afternoon just trotting from one scrum or line out to another and trying to avoid letting their full back get anywhere near the ball.

We kept the score down to a respectable defeat.  At least we were given a decent meal afterwards and were donated a few buckets of beer as impoverished students with thirst issues.  That some of us were ex-service helped

They were quite apologetic. Apparently they were a man short and a chaplain who happened to be around had volunteered to play, he said he was a full back so they lent him a shirt more in hope than anything.  There was something familiar about him that we could not quite place at first.

In The Telegraph today in the Obituaries I saw one that kicked in the memory of that wet and miserable afternoon.  The chaplain clergyman who took the shirt to help out the opposition team was Gerry (J.G.M.W.) Murphy of Trinity College, Dublin, the British Army XV, The Barbarians and Ireland.

Other than the rugby and that he was a chaplain, I did not know of his overall background and career.  But as now one of my interests is who might have met who or been connected in an unexpected way it adds to the collection.


He is a good man to remember and honour in his going.  But I wish it had been a fine frosty day with a firm pitch and we had been able to run the ball.  We might just have given him more trouble.