Saving For A Rainy Day 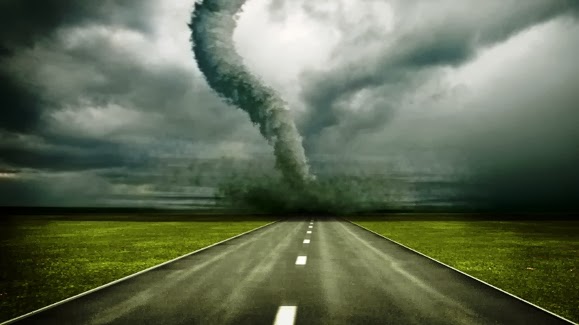 On the train clanking out over The Thames, looked up river and saw some cloud formations which looked out of place.  We agreed that it was certainly a very heavy shower.  Then the train was diverted and we were told trees were down.  It seems that we had been looking at a mini tornado.  It was a long late journey home as trains queued along the line that was open.

This was not in the forecasts.  These had told of rain and wind and some warnings of flooding.  So in part they were right.  The trouble was either the forecasters were reluctant to give estimates that might have been sensational with the risks of looking foolish if wrong or their methods did not allow for the extra dimension of weather extremes.

Weather patterns can be variable in the short term as well as the longer term.  I am hesitant to use or even suggest "climate" because that is now a provocative word in debate or discussion.  In North America and other places the weather has become more extreme one way or another.  From history, and that is sketchy at best. we know it happens and has happened often enough in one place or another.

One feature of interest is the large blocking weather system that has been off California for some months now leading to water shortages.  The assumption is that it ought to go soon.  But that is not certain.  Could it stay for months or for a run of years?  We do not know enough about the past, other than from archaeology to know of any precedents for certain.

One puzzle in the mind is what the populations of California might have been in the past.  Now it is said to be close to forty million.  Yet in 1850, the figure, that might be well short was less than a million.  What figures might it have been in the past?  Given that it has been such a rich and fertile land why did the population never seem to be enough to enable an ancient civilisation or two or more to exist?

We are aware from other parts of the world that a change in rainfall patterns that are prolonged can have a catastrophic effect on water supply, the land and the population that can be maintained.  In the Indian sub-continent in the past monsoon failures over continuous years have led to depopulation of the districts affected.

When I studied history in the past and read of empires and civilisations lost, or upheavals, breakdowns in kingdoms or persistent conflict it was all about power, politics or religion. Weather patterns or climate were little mentioned, if at all purely incidentally as part of the background.

There was not much attention given to economic factors, all too often, which can be a mainspring in the motives of power seeking.  Given that so much was known about Emperors, Kings and potentates and their statues and building sprees, it was not difficult to assume that other things were necessarily of little or no significance.

What exactly would be the economic effects of years of the current weather conditions in North America?  What if these do materialise elsewhere in a failure of the monsoons?  Also, there are other heavily populated areas vulnerable to radical weather changes.  In minor areas, such as the northern part of mainland Britain, serious deterioration in weather conditions have had major political effects in the past.

The one certainty is that the human population of the globe is almost entirely unready to deal with these, assumes that they cannot happen in the immediate future or that governments can and will be able to deal with them by printing more money.


Down the ages one regular feature of human behaviour is the willingness to play games and gamble.  At present we are taking one huge gamble on being able to cope with anything the weather can choose to do.