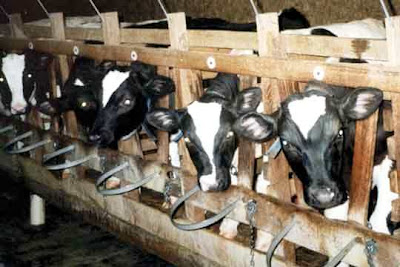 In the long past many, probably most of your ancestors and mine shared their smoky hovels with the livestock, a good deal of insect life and an extensive sample of the bugs available at the time. Often health issues arose, but if a new strain of bug occurred as a result of these conditions it might not travel far.
In our global world transport of people, food and products a new bug can travel far and fast and out run any health inspectors or medic’s who give chase. Because of the scale and nature of industrial farming and well as processing the antibiotics and other things given to livestock, poultry, fish and the rest will find their way into water systems and a variety of common foods.

It is part of our modern life’s excitements.

Today the “Washington Post” has as a lead story:

“The bacterium that has killed more than a dozen Europeans, sickened nearly 2,000 more and raised international alarms would be legal if it were found on meat or poultry in the United States.

If the bacterium were to contaminate fruits or vegetables grown here, there would be no way to prevent an outbreak, because farmers and processors are not required to test for the pathogen before the food heads to supermarkets.

If somehow this strain got into that same environment and spread rapidly, it would represent a major disaster in terms of the U.S. food industry and risk to humans,” said J. Glenn Morris, a former official with the U.S. Department of Agriculture who directs the Emerging Pathogens Institute at the University of Florida. “The regulatory framework is a couple of steps behind.”

So if in Florida for a holiday, avoid the Germans around the pool like the plague.

In the meantime from the University of Cambridge there is a story about a new strain of MRSA found in cattle that may have dangers. The Eco lot have been quick to remind us that the use of antibiotics in routine feedstuffs for livestock may have serious consequences if resistant strains of one thing or another emerge.

Used with care, sensitivity and managed properly within clear limits both antibiotics and antibacterials have their uses in medical treatments and such. But when they are stuffed into all sorts of things; used without discrimination and on the largest possible scale for production and marketing purposes there will be consequences.

The same can be said of many other substances in the past and present. It is a matter of human experience that misuse and overuse will have adverse effects. Some of these will be quite nasty. The mad hatters of Luton and the phossy jaws of the match girls are but two examples as well as the 18th Century belles with white leaded faces.

Recently, but not much in the UK, typically, there has been attention paid to these issues. It is often difficult to understand because of the science and the complexity. But the sooner we accept that we could be doing more damage than good then we might begin to control ourselves.

The Health Protection Agency is almost worse than useless tending to turn up at the party long after it has finished. Also, it is under the thumb of Porton Down. Senior Army medic’s I once knew held the opinion that Porton Down was a lunatic asylum for mad scientists. I sometimes wonder if the HPA in reality may be engaged in a large scale series of experiments on the entire UK population.

The web site Science Daily is the major source for many UK media stories about health and scientific matters. The errors made by the interns who knock out the stuff for the press can be amusing. But the site does lead you to the original research which can often be accessed.

The link below gives some very recent research on antibiotics.

The page on the link has other articles on the same subject.

Have a good weekend, will you be eating out?