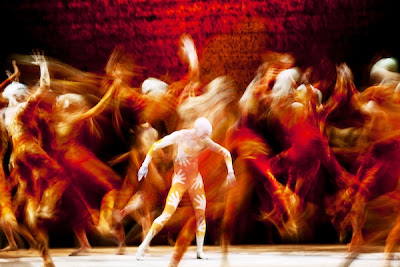 Serendipity is at it again. As the media laps up the leak of the Great Plot of 2005 when the idea of displacing Blair as Prime Minister gripped the Brownite faction in government the Royal Ballet have “The Rite of Spring” in performance this week.

This 1913 work, set to a thumping score by Igor Stravinsky, was said by Leonard Bernstein “it’s never been topped for the sophisticated handling of primitive rhythms”. It deals with a sacrificial rite of human sacrifice amongst an ancient tribal group seeking to appease their gods. Stravinsky drew on Russian folk music and Nijinsky choreographed a ballet on the basis of tribal dances as opposed to the traditional ballet form.

The plot is how The Chosen One is picked out and meets his or her end. But the Brownite Plot was not sophisticated and while it was clear who was chosen for sacrifice they failed to achieve their purpose. Consequently, the gods who rule the financial markets duly punished them. Like the first performance of the ballet in Paris in 1913, it ended in chaos and riots.

At Covent Garden the role is being shared by Edward Watson and Steven Mcrae, this time round male rather than female being the Chosen One. Both of them are at the peak of their careers, athletic, strong and wonderfully sure on their feet. They remind me of the sort of half backs in a Scottish Borders Rugby XV in former days before the pumping up of muscle became required for the first class game.

Brown played rugby of course, but I believe he was a front row forward, which tells us a great deal. Many times I had issues with front row forwards and I was very grateful for both my grandfathers training from the trenches and my father’s ability to throw a left or right hook from nowhere. But they are often a little slow off the mark and this was always a characteristic of Brown.

In some ways, it is a pity that Brown did not succeed. The stasis at the heart of government in the period 2005-2007 and the lack of control over both policy and action led to the shambles of that period. Given that in the run up to the 2005 election Labour had embarked on a high spend and high risk course this meant that a bad crash became inevitable.

This may well be the period in which the high persons in and around the Labour government began to take advantage of the situation to ensure their personal financial futures and to establish themselves in positions that would last long into the period when a new government might rule. Labour’s tribalism dies hard.

Unless the Coalition manages to assert its authority and work together then another dance might begin to find a new Chosen One to sacrifice. There are all the signs that this will just as primitive but rather less attractive than the ballet. It will also last a great deal longer and the Whitehall version will cost each of us a lot more than a Box Seat at Covent Garden.

But there you can get in for the ballet at less than a tenner if you choose.
Posted by Demetrius at 14:26