Taking A Beating In School 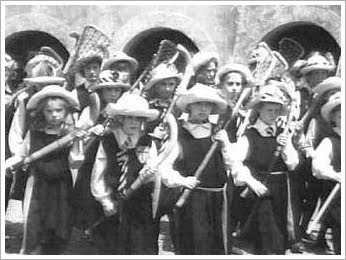 In the media row over which schools were which and whose new building had been taken off the list for renewal there was one key element which was little mentioned in the media parades of proud parents, all those weeping children and anxious teachers.

It was that when Mr. Gove looked at the financial figures he had thrown a bigger wobbly than when the average family looks at the credit card bill after Christmas. By any standard the financial figures were horrific. What I cannot begin to understand is how any functional government machinery could come up with plans to build on the basis of deals like that.

The only explanation is that the culture of bonuses, favours, and financial kickbacks was such that these people were all literally pillaging and plundering the Education budget for decades to come. Mr. Gove was going to be damned if he did and damned if he did not question what exactly these plans consisted of, how they were to be paid for and on what basis.

Looking back over the nature of school education building in its various phases from the early 19th Century through the 20th until the last couple of decades what I do see is the sharp contrast between how it was managed in the past and what has been happening recently.

There were never the anything like the numbers of consultants, legal people and all the financial elements that have been brought in so recently. In a typical County or County Borough of the 20th Century, or its successors in the 1970’s through to the 1980’s at management level there would be a handful of people in the commissioning Department handling new building as part of a wider package of duties.

Then there would be a couple of architects either from within or contracted according to strict rules and a couple of people each from Legal and The Treasurers. That would be it. Before 1974 in some of the small Local Education Authorities the building programmes would be managed by literally a handful of people. Yet they managed to put up decent buildings for the period.

Moreover their salaries and expenses, part of the routine annual budget and determined by fixed national scales, would be paid out of revenue. Additionally, whilst building and fixtures would be a capital item with expenditure and municipal borrowing firmly controlled, kitting out and putting in all the consumables again would be out of revenue. None of this would be allowed against added debt and again within clear limits.

If so much management of building programmes could be done by so few and a lot of it quite well and with massively lower comparative on-costs, what on earth has been going on in the last decade? Why at management level should it take twenty times as many people on typically five or more times each the real salaries of those of the past and with added bonuses and incentives to build worse buildings?

And all of it on borrowed money at almost penal terms. There are other awkward questions. Looking at some of the buildings that are to be replaced, they are not that old. What has been going on in relation to the maintenance and repair budgets? If a lot of these buildings have been allowed to run down so much that urgent replacement is now necessary, who is responsible?

Another is the distribution of these projects and who benefits. Are by any chance a disproportionate number of them in former Labour held or marginal seats? In other words did the Labour government in its last months having run down schools repairs and maintenance suddenly come up with a wheeze to throw money at some localities and ask all its many best friends in financial services to help come up with the money off balance sheet?

For Mr. Gove there is one lesson and a hard one. It is that none of his Department, the Agencies with which it is connected and others can be remotely trusted either to give him reliable information or to do the job that needs to be done. Somehow he will have to check, check and double check everything they handle and bring to his attention. He, and his colleagues are going to put some heavy stick about.

Because almost wherever you go and whichever department of state in Whitehall you can think of, the same problems arise, the same situations will be found and what was once the Civil Service is now a motley crew of incompetents and shape shifters on the make personally and to hell with the notion of serving the ordinary public.

In the recent media excitement about school buildings the story has been about denying a number of people what they had been led to expect. A lot of us are going to get this soon in many ways and probably worse.

What we have to face is whether the new administration are up to it or whether they will just stumble along trying to make the best of a very bad job.
Posted by Demetrius at 17:14