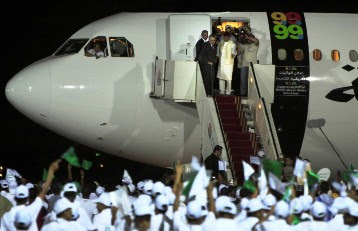 The look of relief on the face of Abdel Baset al-Megrahi as he left the plane in Tripoli after his release from Scotland may have been that at last he might receive some proper medical treatment from competent doctors. This is not the place to debate all the difficult legal, moral and political issues surrounding his release, there is more than enough elsewhere.

What I am looking at is the information that is missing in the latest farrago. We are assured by the Scottish medical authorities that it was the medical evidence that was critical in their recommendation for compassionate release. The Scottish legal men and politicians claim that they proceeded strictly on the basis of this advice. What was going in London is all a great mystery, or something.

As it is medical evidence, mercifully for those who made the decisions in this age of Human Rights, it is shrouded in secrecy, or rather privacy. But what say, if for reasons of convenience, incompetence, stupidity or arrogance or all of these in the case of al-Megrahi his treatment and medical handling had been botched? What if medical evidence that should have been there wasn’t?

No wonder nobody concerned wants to go the USA to admit that medical analysis and treatment that would be routine even out in the sticks there simply wasn’t done or even considered in the case of al-Megrahi. If he had prostate cancer then he was certainly a sick man. As such any other compromising medical issue would have a serious impact on his overall health and might appreciably increase the risks and prospects for the length of time he might survive.

Could this happen in Britain? Indeed it could and does and all too easily. In Britain the practice if someone is having serious problems is to work out the options and then test for only one. If that doesn’t work, then tough, or declare some catch all syndrome and shove some medication across to shut the patient up. If something nasty happens under medical treatment the Primary Care Trust is very likely on legal grounds to refuse testing or examination and the doctors to sit on their hands.

There are a number of medical reasons why al-Megrahi may have been very ill for reasons beyond the basic problems of his prostate. Two are picked out solely as examples of what can happen and to illustrate the issues. It could be that other issues affected him, but the same considerations apply.

One is dietary and the other toxic chemical as contrast. Reaction to gluten is a condition suffered already by many and the numbers are increasing. The reasons for the rise in numbers are relatively simple. Modern wheat and other grain varieties today have more gluten content than those of the past. We are eating more grains and processed they appear one way or another in many packaged food that are a staple of modern eating. Ergo, more gluten, more eating, more reactions.

So a lot of people suffer serious problems and pain in the lower abdomen and go to the doctor. Are they offered tests for gluten? Fat chance, in the NHS this is treated as a last chance saloon option and only if you know about it and make noises. You are likely to spend years suffering on expensive IBS medications, with all the nasty internal damage being done, before anything else, including gluten, is considered.

The chemical one is Chlorhexidine. If you go to Google Scholar, or just ordinary Google and tap in that word with “Anaphylaxis” you will be amazed at the number of hits you get. It was in 1998 when the FDA of the USA first put up a warning about this chemical specifically relating to cases of prostate problems in men where chlorhexidine impregnated catheters were used in the course of treatment.

Since then a lot more has been researched. In the meantime it is likely that a lot of elderly men in treatment for urology issues have died from reactions but the deaths put down to respiratory or cardiac issues, especially in Britain. What is known now is that reactions to this are both nasty and dangerous. Also what we know is how difficult it is to get referral to an immunology specialist for proper testing and analysis.

If al-Megrahi has had this then he can only have got it from treatment in hospital using a chemical product that was already known to be dangerous. One interesting piece of research on chlorhexidine suggested that along with Cetrimide you might get cirrhosis of the liver. So couple of drinks, clean your teeth and do a mouthwash you could be doubling your chances.

As stated, there are a number of dietary, chemical and other problems that could have a debilitating and severe effect on an already sick patient. Often it takes a good deal of time, trouble and preparedness to do the analytical work to find out and confirm the critical issue. In the case of al-Megrahi in Scotland I doubt that any of this was attempted or considered.

Perhaps a couple of easy tests that proved inconclusive might have been tried, but all too likely the medical evidence was a spatchcock job done in the writing up of the report, emphasising the basic prostate condition and given a dressing of psychological colouring. After all, it wouldn’t take much for the medic’s to blind the politicians with science. As medical records etc. are covered by the laws etc. on privacy, then who would ever know?

So there it is, probably al-Megrahi’s prostate condition was not diagnosed until late, then the routine treatments did not go well. Given the political sensitivity of his case he was given more advanced treatment and medication and somewhere along the line contracted something that hit him badly.

This was neither diagnosed nor treated properly. Hence he was nearly dead when shipped off to Libya. When their medical services took over the case they soon sorted it out, improved his overall condition and extended his life expectation. No wonder all those involved are running around in a panic.

There is a personal twist to this. In 1988 we were living in the North of England and sometimes the sky above would be busy with large passenger aircraft and sometimes not. It was explained to me that it was the way the jetstream was flowing that would be the reason for the changes in the routing of Trans Atlantic flights.

On Wednesday 21 December 1988 the planes were flying the northerly route and it was likely that Pan Am Flight 103 was near to us about half an hour before the bomb exploded.
Posted by Demetrius at 14:25