London, The Great Wen, What And Why 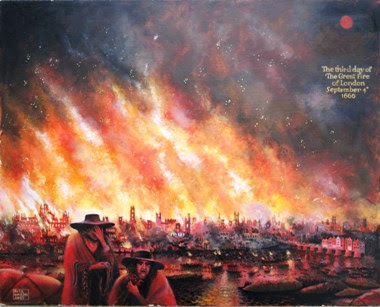 Just when you thought it was safe to go out in the light a reminder that the Mad Max Spenders are still loose out there on the street. On 5th July in the LSE site:

Tony Travers, Professor of Local Government etc. at LSE, the author, had a predecessor in the job named Professor Smellie who introduced undergraduates to his lectures with the profound observation that Local Government was two things. First it was local and second it was government. Nowadays those institutions calling themselves by that name seem to exist in a virtual unreality of their own.

Travers therefore became a guru to the former government and adviser on matters local and such like. He had to come up with big ideas. Preferably ever so big that they entailed spending vast amounts of money, surprisingly mostly in Labour held areas. See the figures for London he gives above and weep.

The latest big idea, maybe destined for the next Labour manifesto, especially if either of the Brothers Grimm Miliband, purveyors of fairy tales to the media, take control is that Greater London should become a City State free from England but still within and presumably in control of the UK. He claims that England is now a nuisance to London’s ambitions and purpose.

He asserts that government spending is only one third of the London economy and needs to be a great deal more if it is to continue its growth. This of course is direct cost, he conveniently omits indirect, a Travers characteristic. He suggests a Barnett formula approach to the government funding of London, notably if Scotland forgoes the one it was given in the late 1970’s as a quick fix to a temporary difficulty, to levy its own income tax. Do I hear the skirl of pipes and shrieks of laughter?

Travers alleges that London is the great engine of UK growth and therefore needs to increase its population by around 9% a year to staff all those extra public sector direct and dependent jobs with tourism and entertainment. To do this London needs to run itself free from UK interference but still taking taxpayer money and likely free from Westminster and Whitehall interference. But if the government of England remains in London this raises some intricate questions.

It is just within the bounds of possibility that there might be special pleading here. Back in 2007 the LSE was sending 30% of its student output into financial services. How many went into the public sector and other related organisations is an estimate, but somewhere around 45% would be near the mark.

Could it be that many LSE graduates now have to submit to the indignity of more ordinary work? Is it that LSE no longer has the attractions it did on the world student market? So the UK should be broken up and London floated as the ultimate taxpayer funded financial service to support the LSE?

At this point I introduce the ghost of William Cobbett. In his “Rural Rides” of around 1830, when my in-laws were torching their local workhouses in Hampshire, he refers to London as “The Great Wen”, a growing running sore on the back of England sucking the goodness and wealth out of it eventually to destroy and ruin it. Most historians think he was over the top on this, but some of us are not so sure.

In any case perhaps Travers should do a little extra reading, the intellectual shoddiness of this piece suggests someone in a hurry who is careless both of his sources and conclusions. One place he could start is in the Robbins Library a few yards away, the British Library of Politics and Economic Science. It is part of the LSE. There he will find the Booth Collection, the detailed analytical studies of London population done by Charles Booth at the end of the 19th Century.

They are online, but it is much better to spend time on the originals with a good street map to hand. They are a fascinating reminder of what can happen when you allow unchecked inward migration without thought for the consequences. If he went further and cross checked the detail with some of the key districts against the 1891 and 1901 Census Returns he might be better able to understand migration patterns.

Also, he might return to the work of the Environmental Initiatives Network of a few years back that has retreated from interest and activity. This was based at LSE but in recent years its messages and purpose have been very much out of fashion there. This group were attempting to address the long term consequences of rapid environment change and the threats to the world economy and political structure.

One talk in the Old Theatre was a speaker who was explaining what it takes to make a large modern city work. He tried to convey this with the idea of each urban area making a footprint on the planet. The bigger, more complex, and richer the urban area was then the bigger and more demanding was the footprint. That for London was very big and increasing rapidly in size.

When that might become unsustainable would depend on a number of factors but when it did you might have a slow decline or you might have a rapid collapse. The rapidity of collapse might depend on how well London was controlled, who was controlling it, and how good its relationships with its hinterland were. .

The financial developments in London under the last government rather than creating a thriving economy as a whole, effectively took a wrecking ball to the economy of England, both urban and rural. The structural damage caused to local government is extensive. Travers might care to look at some of the detail.

Within the UK the situation was modified in some areas by imbalances in state funding, but over much of England the life has been sucked out of the private sector and local communities. See the item on Tuesday 19th May 2009 on “London Pride And Tamworth Pigs” for a fuller item on my views.

Perhaps London might become master of its own fate. How much would we in England charge London for its water, its energy use, its food supplies, and the other general services on which it might depend? If we could write London out of the Budget for England and charge for all this support at a level that would cover real costs, it might be worth it.

If England left the EU and London stayed within it would be interesting to watch the decay begin. It has happened before and can happen again. Where exactly and in which Royal Park would the Mayor of London start drilling for oil?