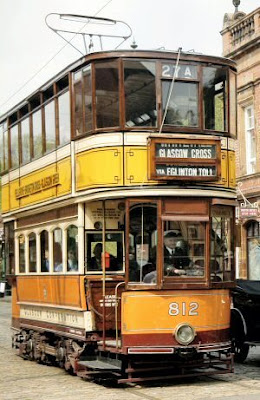 When I became a teenager my Grand Uncle John from the Scottish Presbyterian part of the family told my parents that he could fix me up with a job in the Corporation Tramways. If I was sensible, obedient, reliable and hard working then if I achieved the rank of tram driver I might ascend to the giddy heights of inspector and live in a semi-detached house. These were not personal qualities that were evident and as there had been an unlucky business with a milk float my parents were nervous about letting me loose anywhere near wheeled vehicles.

As time went by and attempts to find work for me ended in conspicuous failure I continued in education by default with a spell in the Army. My Grand Uncle and my parents were not sure of the point of it all. What use was a degree unless there was a specific vocation or occupation demanding long intensive study that would justify it? They belonged to generations where a university degree had limited currency.

My Grand Uncle was a good and in many ways a wise man who had never seen the inside of a secondary school. He was very well informed, read a great deal and had a critical faculty that was as sharp as a razor. In our town few men of commerce or business or occupying senior positions needed a degree and if anything time spent on this kind of study was a waste in pursuing any real career. Essentially, you worked your way up, often by part time vocational study.

How things have changed. Higher education is now becoming a commercial activity with notions of throughput, target meeting and added value in terms of financial return. This item from “Current Archaeology” Issue 242 of May 2010, “Sherds” by Christopher Catling tells us of what the world of learning is now about and it is not learning.

Academics tend to be an unhappy bunch these days. No longer do they just have to be good at teaching and research, but they now have to earn their own keep and contribute to the fat-cat salaries and grandiose building schemes of the new breed of professional university managers. One way to do this is to take on more and more students, and to mark them positively, so that the university rides up the league tables.

Many more first class degrees are being awarded now than in the past, even though standards are widely held to have fallen as a result of a decline in pupil/teacher ratios and face to face teaching.

Departments that cannot increase their income are closed down, no matter how highly they are held in international regard. This was the case with Southampton’s Textile Conservation Centre, and is the likely fate of the Departments of Palaeography and Byzantine Studies at King’s College, London. One King’s College apparatchik described this as “strategic disinvestment” aimed at “financially viable academic activity by disinvesting from areas that are sub-critical level with no realistic prospect of extra investment”.

Academics also complain of loss of tenure and the feeling that “I cannot now even read a book in the Library without being required to secure a grant to cover the cost.”

For all these reasons there is widespread, if muted, satisfaction in the recent victory of Professor Paul Buckland over his former employer, Bournemouth University, which must reinstate him or pay compensation for loss of income, having been found guilty of constructive dismissal. As Professor of Environmental Archaeology, Paul failed 18 out of the 60 second year undergraduates who took examinations in 2006.

He did not do so out of elitist disdain: one student attributed the decline of elm trees to diseases passed on by dogs; another said that the eruption of Pompeii in AD 79 “changed the pattern of human evolution”. When the university re-graded the papers without his knowledge, he felt he had to resign to protest against what he called “an unequivalent affront to my integrity”.

In the Court of Appeal in February 2010, Lord Justice Sedley ruled that the University had undermined Professor Buckland’s status and it was the “inexorable outcome” that he had been constructively dismissed. The University had responded by saying that this is entirely a matter of employment law and nothing to do with what Professor Buckland called a “much larger process of dumbing down”.

Academics disagree; they see it as a small but important victory in the battle to stop what Sally Hunt, General Secretary of the University and College Union, calls the “marketisation” of university education.

What was it that Gerald Ratner said about the wares in his shops? “We also do cut-glass sherry decanters complete with six glasses on a silver-plated tray that your butler can serve you drinks on, all for £4.95. People say, "How can you sell this for such a low price?" I say, "because it's total crap".

So what happened to Ratners?
Posted by Demetrius at 17:40