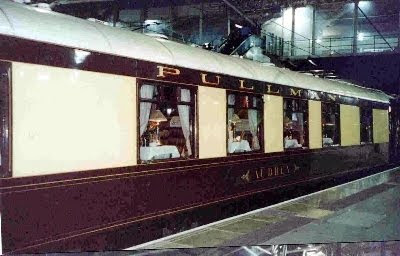 We parked the car on a small town station car park and it cost a fiver, the reduced off peak rate. As we waited for the train a tourist special trundled through made up of old Pullman coaches. My memory twitched and I recalled that in 1959 I had paid five guineas (£5.25) for a Pullman train from Paddington to Cardiff and back, lunch and dinner included, with a ticket for the game.

A couple of years back I had the notion to try one of the Heritage Pullman journeys for a good day out. The price made me change my mind, a couple of noughts would have to be added to the 1959 figure for the two of us. This is inflation.

In London again and the Chief Executive and Finance Director was noting the expenses. Just over fifty pounds was the conclusion for the expeditions overall revenue outgoings. It covered admission, the cheapest rail fares, the parking and an estimate for fuel. We carry all our own food, the normal one days marching rations, together with liquids and ancillary equipment. At a good £10 for a large cuppa and decent bun for the two of us we do not buy.

It was in April 1958 that I was at the Theatre Royal in Drury Lane for the London first night of “My Fair Lady”, standing at the back of the stalls. I had a three course meal in the canteen before and a couple of pints after and had decent change out of a ten bob note (fifty pence).

These days it is hailed as one of the great “hits” but before it began there was a lot of doubt. A musical based on Shaw’s “Pygmalion”? After the wonderful film? And American? I was there to see Stanley Holloway, worth the ticket price on his own, but I was certainly delighted by the show along with everyone else.

Also, in a way it was quaint, because it was set in a world before 1914 when prices and wages were very much lower than the expensive 1950’s. Then for many people £50 could be regarded as almost a small fortune and a years income.

Now it cost fifty quid for rather less in the Summer of 2010. Around forty years ago in 1971 a weekly wage at that rate was buying me a mortgage on a four bed roomed house with garage, garden and fitted kitchen and bathroom, admittedly in a cheap part of the country. This was at two and a half times salary.

Also, I ran a Ford Cortina, went to a few First Division football or good Rugby matches and enjoyed a few beers now and again. We did not worry about credit card bills because we did not have credit cards. The occasional great cultural occasion could be managed. Yes, I saw Freddie Starr perform at the Batley Variety Club.

One of the joys of satellite TV is that there are many channels where it is possible to find programmes that reveal other people can be nearly as disorganised and have almost as many failings as one’s self. Not many, but some and one of them, a repeat of a series I missed originally, is called “Heir Hunters” about inheritances unclaimed where the deceased died intestate and those firms who search for the relatives hoping for commissions if a claim succeeds.

Sometimes a figure is quoted from the past that makes me sit up and wonder at the price and relative value comparisons taken from the ONS series of statistics. One in particular caught my attention. Someone around 1930 left an estate worth £800 and Julia Sawalha, the presenter, told us firmly that this amounted to £22,000 in today’s money. Removing the rude words I remarked that this was unlikely.

At that time £800 a year was very high salary, few Headteachers for example, would be anywhere near it and in ordinary industry and commerce it suggested senior managers. It might also buy you in many parts of the country a decent semi-detached house in a desirable area. At a pinch you could employ a day cook and a housemaid if your other expenses were not too high.

This was an era when price structures were very different. Food and clothing prices were relatively higher than today in real terms as well as white goods and other products. A decent new radio could cost a working man a month’s wages. On the whole consumer goods were much more costly and people had fewer of them and expected them to last. We are still using grandma’s old pillow cases.

So if you base relative price indexes on these kinds of goods you might well come to the conclusion that £800 in 1930 was worth £22,000 now. But that figure would not buy you anything like the total contemporary lifestyle you could enjoy for £800 a year in 1930. As you go back into the past the discrepancies become more serious.

The documentaries on satellite TV quite often have reconstruction efforts and items detailing what exactly was involved in making this or building that. For anyone who had done any costings the conclusions are stark. If we look back at all those ancient ships, cathedrals, buildings and landscaping the real cost in today’s terms has to be hugely adrift of the ONS comparisons. Putting those costs in terms of the actual lifestyle etc. of the period means that the ONS figures based on a narrow basis of modern consumer spending are very wrong.

OK, you might say this is all ancient history, but it is not really important. But it is because the ONS and current statistics have been telling us that inflation recently has not been all that much. In the meantime property prices and debt charges and many living costs, not in the indexes, sky rocketed along with other things involving necessary payments. Because property is defined so much as “investment” we have forgotten that it is also a part of essential living cost and as much “consumption” as anything else.

This may not be inflation to the government as it has chosen to define it for the purposed of formulating politically acceptable spending plans and that it is generally convenient to hold the headline figures down. The media may have bought this fiction and too many economists are too concerned with mathematical models based on limited data but there has been runaway inflation in the real financial burden to most of us who have to pay in real money. So now we may have to face the backwash of all this.

If between 1965 and 2005, part from one or two glitches, we have been using cheap oil and this has meant cheap energy, food, distribution, transport and consumer goods because petrol-chemicals are an essential primary resource in all these sectors then it may not last. If the costs and prices of these rise in real terms then we may well have sharp inflation in the actual ONS figures with the effect of major reductions in real incomes, especially with savings income depressed by interest rates being held down by central bank intervention to fund property activity.

In the UK we have out sourced increasing proportions of our food production, making of consumer goods and most of our clothing industry. We have become dependent on overseas capital for credit and much of our management and administration is now abroad and/or offshore. Even our so-called high tech’ activities are increasingly bought in and foreign provided. Our private pension funds are reliant on overseas financial trading and our public sector schemes on government borrowing to cope with government spending. The property market and pricing is almost our sole driver of economic activity.

With the government throwing money at the property market and construction this means it intends this inflationary sector to go on rising in price in both money and real terms to keep all their personal fortunes intact. If they are not careful, the whole pricing structure may begin to collapse so that we get a massive deflation and related contraction in economic activity. In terms of the money, where we are and where we go, nobody will be certain and it will be a recipe for serious unrest. It has happened before historically and can happen again.

When you hear about inflation few of us understand the reality but it may be about to return and all those wonderful ONS statistics may not be of any use at all to the policy makers or to the rest of us and nor will any historical comparisons.
Posted by Demetrius at 16:55