BBC Proms, Losing The Chord And The Picture 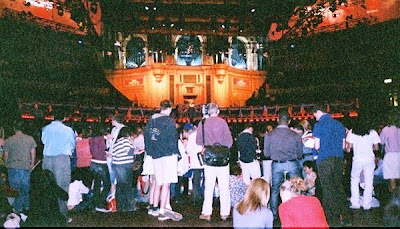 The 2010 Proms have begun. It took the BBC forty years after it took over this festival of music to begin broadcasting it in a regular and reliable fashion on the radio. It has taken even longer for the BBC to come to terms with this new fangled TV thing that has so upset their ordered universe.

At first the only TV item was the Last Night second part that was put on to feature Sir Malcolm Sargent, a celebrity conductor. One disastrous effect of this was to fasten a completely false image on a complicated and broad based music festival. It was something that the BBC resolutely refused to shake off until very recently despite the evidence under their eyes. Yet another case of BBC image being totally at variance with the facts

At present and in recent years with the BBC Proms team in tandem with R3 it has been possible to know what was happening and why on radio. Unluckily, when it comes to TV this falls into other hands. Too many of them with too many distinct organisational and internal political interests to be able to sort out what they are supposed to be doing and why.

The TV programming has become a hit and miss business that both ignores its audience and the real purpose of the festival. This year it is a Mahler anniversary and there is a big Mahler audience out there, not only in the UK but internationally. When you see the grotesque mess they have made of this it is astonishing.

For those that they do record or broadcast do not worry about when you might ever hear them again. Barely anything will ever appear on DVD or CD or other channels and any repeats will be scant. They will disappear into the bottomless pit of the BBC Archives lost to any of mankind and hidden from public sight and hearing forever more.

If you want to see how not to televise a major festival for the audience that is likely to watch it or others who might wish to try, then read below and wonder. Remember there are large numbers of highly qualified very expensive people organising and arranging this who have had more management training between them than had the entire population of Britain before 1980.

It is listed by the Prom number where TV is involved and DS is delayed start and NTG is no time given.

Enough, enough, I have begun to gibber and need cold compresses.
Posted by Demetrius at 16:57