What Is It All About? 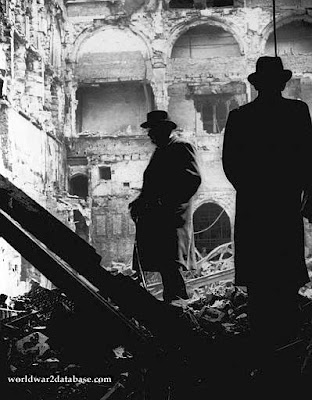 At the time of the general election in 1945 everyone knew the scale of the mess and the nature of the disasters that the war had wreaked. In most places we could see it, smell it and it affected almost every aspect of our lives. The politicians then admitted most of it but even then we were not told the whole story by any of them.

Too many Conservatives retained illusions of imperial grandeur, too many Labourites wilder illusions that the centralised state could cure all and too many Liberals all the vague notions and muddled thinking left over from 19th Century theories. We were given a United Nations but what we got was the Atom Bomb and forty years of Cold War.

At least then we had a relatively coherent system of government. It might have looked like a patchwork and certainly had many variables but we did know who did what and why and where they worked from. It is striking to think that the Counties of Rutland, Radnor, Clackmannan and Fermanagh and for that matter County Boroughs such as Oldham had a greater measure of independent responsibility and scope of action than does the United Kingdom at the present time.

What do we have now? In the world of law there is a Supreme Court whose function seems to be to agree to a collection of supreme idiocies pronounced by others. We have a set of courts where most of us have lost sight of who does what or why. What we do know is that absent minded pensioners who sell a goldfish will be severely punished but serial violent burglars will be able to chalk up hundreds of offences before recognition and murdering drug dealing gangsters are protected. Libel law allows the rich and powerful to defame anyone they like, break laws, stop criticism even if they are killing people and punish and ruin the innocent, especially anyone devoted to the idea of scientific debate.

There is a House of Lords which meets and deliberates at huge expense for very little reason or rhyme. These hundreds of appointed cronies, time served politicians, party political subscribers and occasional nods to a limited number of minority interests with an effect on marginal constituencies occasionally gather to mutter into their microphones words that nobody listens to.

The House of Commons is the Deserted Village of representative government. Once a busy place on screens now it usually appears a sea of green (benches) with very little activity that is either productive or makes any sense. The administration rams through ramshackle, badly drafted, damaging laws in which the only certainty is that the unintended (expensive and damaging) consequences will outweigh by far any real benefits.

Each of these laws will impose great extra burdens on the taxpayer. Most of these laws give the administration vast uncontrolled and unchecked power to do what they will through agencies and non-government organisations that each has a life of its own, largely free from any legal or other controls.

We do not have a “government” as such at any level. We have a confusing collection of entities that rarely act either in concert or with any logic. I have not even mentioned Europe that real controller of our destinies. Despite “Freedom of Information” finding out what is going on is very difficult and the media have given up the job, now relying on interns reworking the output of all the public relations staff now employed and trawling the internet to pick up odd items.

So all these “campaigns” going on are a lot of clatter by power seekers hoping to get hold of the levers of finance and means of “added shareholder value”. What they are not telling us is how little either the House of Commons or the House of Lords do, the way in which they have lost or surrendered authority and power, the scale of the mess, the spread of corruption, the extent of the destruction, or the kind of world or future we face.

What is it all about? We are not being told and we are not going to be told. But we will have to pay.
Posted by Demetrius at 12:27