Maps Do Furnish A Room 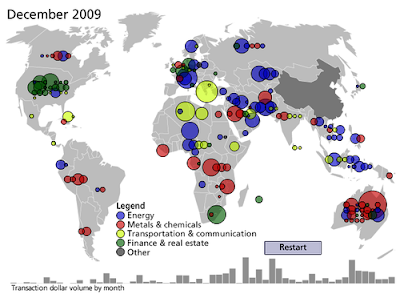 The BBC has been running some interesting programmes (gasp) lately on the subject of maps and map making, parallel with items about Captain Cook and his mapping on satellite documentary channels. The reason is a major exhibition to open on 30 April at the British Library on the theme of “Magnificent Maps: Power, Propaganda and Art”. It is difficult to imagine at the beginning of the 21st Century how mapping was regarded in the past and its political and intellectual significance.

A good map can indicate in what appears to be simple visual terms what is a very complicated set of facts and ideas. The one above is taken from Economic Road Map dot com of 23 April quoting an interactive feature in Forbes on the subject of China Widens Its Reach in the extent of investments by Chinese firms and arms of its government in recent years.

What is striking about this map is that if you combine the British Empire of the 19th Century with a plot of where the overseas investment was going from the City of London in that period then there would be a strong similarity. Clearly, Imperial Russia was no part of the Empire, but there was a lot of investment there and in Imperial Russian Bonds. Equally, in other parts of the world beyond British control there was a capital in their developing railway and other communication and financial systems. A good deal of growth in the USA came from British money.

In the 1870’s Disraeli, with money borrowed from Rothschild’s, snapped up the Khedive of Egypt’s shares in the Suez Canal Company when he became financially embarrassed. In borrowing on a large scale for consumption purposes, the Khedive had not looked at the small print and when by the 1880’s he defaulted Britain put in a Baring (Evelyn Baring later Lord Cromer) and the troops and took control. This led inevitably to the entanglements in the Sudan to protect British interests. Gordon of Khartoum may have thought he was dying for Christianity but in practical terms he was there to protect shareholder value of the City’s major investment banks.

There is an academic debate over the scale and natures of China’s seagoing ventures at the turn of the 14th and 15th Centuries. Was it all about astronomy and mapping? Was it the search for new lands for trade, commerce and perhaps control? What did happen is that China, on a change of regime, stopped the voyages. Given their scale it is quite possible that it became apparent that the potential returns and benefits were not going to be enough. But that was then and in a different era.

How long will it be before China and perhaps others begin to demand more say and more action in the affairs of this nation and that in which they have substantial investments? Just how long will the heavily indebted nations of the West be able to lord it over the councils of international organisations and other entities? What is the old jingo way of putting it? We have the men, we have the ships, we have the money too?

So as our politicians and others in the debt laden parts of Europe play pat a ball with their voters how can one explain simply to the electorates that in the last analysis neither we nor they are in control or really in charge? The Greeks apparently had a choice. It seems that had an offer from China and Russia which seemed to be on generous terms and without too many strings, if they could believe it. From Germany and the EU the money came an offer with a clearer price. At the moment the Greeks have opted for Europe, it seems.

If it is necessary, whose offer will our next Prime Minister choose when the bills come in?
Posted by Demetrius at 19:02