Remembrance Of Times Past 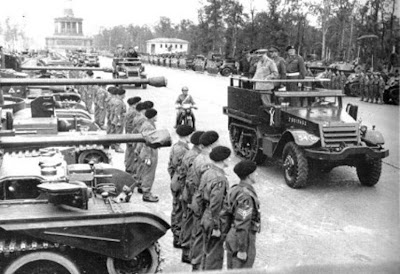 After a swig of my Baggywrinkle Brown Ale from the Nelson Brewery I bit into a premium cost old fashioned crisp. The memories flooded back as I waved the remote at the TV and the Burnley team came into view as a change from Vinteuil’s Sonata. I have seen them play only a handful of times but all close to General Elections, three of times of busts past, 1945, 1959 and 1979.

The picture above is from July 1945 during the Allied Victory Parade in Berlin and shows the Headquarter Squadron of the 7th (Desert Rats) Armoured Division being inspected by Winston Churchill (his bodyguard is wearing the trilby) with Field Marshals Alan Brooke (the man who won the war) and Montgomery with Major-General Lyne, GOC of the Division. The Division was disbanded in January 1948, only to be remustered in March 1949, but finally reorganised to become the 5th Infantry Division in April 1958, later the 1st Armoured Division.

From this high point Churchill was to find out in the following week that he had lost the 1945 Election. The country faced very severe economic, financial and social conditions. The spoils of war were bitter fruits and there was a decade of hardship, shortages, worry, cold, hunger and uncertainty to come. Initially, the Americans gave us scant sympathy as many of their leading politicians believed that the British Empire was part of the problem and they wanted it dismembered in addition to the reduction of Germany to a pastoral economy.

It was when it became apparent that Communism was a serious risk across Europe and that the destabilisation of Britain could lead to its rapid spread through the rest of the World to the disadvantage of American business and power that funding and arrangements were put in place to restore the western economies and inject the right kind of political stability.

By the late 1950’s we were in real trouble again as a consequence of the Suez Crisis coupled with centralised control of investment and finance largely to maintain the pound as a world currency and The Sterling Area, more or less the old Empire. Much of the reality of this crisis was hidden by both the major parties and the media of the period.

This was the upshot of a two party system where neither party represented the progressive and modern parts of the economy, which had to carry the burden of supporting the declining parts as well as constant meddling for short term politic ends. The so called “middle way” called “Butskellism” because of the overlap of the ideas of R.A. Butler, the major economic figure of the Tories and Hugh Gaitskell, Labour Leader, about economic management.

To win the 1959 election Macmillan ignored the advice of his Treasury team in 1958 and went for a policy of increased debt driven public spending coupled with theatricals in foreign policy and retreat from Empire. Given the divisions within Labour it was enough to return him to power.

Luckily after the election of J.F. Kennedy, his relation by marriage, to be President of the USA, Macmillan was able to cut the armed forces, abandon UK nuclear independence and become the junior partner, whilst being allowed the pretence of major power status. The USA allowed the UK a good deal of latitude in its handling of the pound sterling, finance and connections. Whereas in the 1880’s Britain had played a leading role in the Scramble For Africa, now it led the way in the scramble for the exits. The costs of all this in many cases exceeded any benefit the UK had gained from those imperial ventures.

In the next seventeen years we had coming and going of centralist governments that oversaw a steady decline, devaluation, the attrition of much of British industry and ended with the 1976 crisis after inflation went out of control. In their different ways both main parties were to blame and it is too much of a tale to tell here. Very recently we have discovered that the Americans had taken fright and helped the IMF to bail us out. The sums involved were nowhere near present levels of debt.

Not long before Heath had lumbered us with an expensive European entry and a local government and other reorganisations that sent costs rocketing. So when Callaghan and Healy had to turn off the taps at the beginning of 1977 there was trouble in 1978, culminating in the Winter of Discontent. As I was involved in delivering some of the pain it was not a happy time. In 1979 the electorate had lost faith with Labour and the Conservatives returned with a unique leader. Mrs. Thatcher is the one and only scientist to have become Prime Minister.

This time around there was something in the kitty. North Sea gas and oil helped to ease the government finances and contributed to changes that had to be made. There were many mistakes and misjudgements but change did happen and the economy righted in some ways. One major strategic error was to put too much faith into finance. The UK got away with it again because of the generosity of spirit of the Reagan and the USA, mindful of the prime objective to prevail over the Soviet Union.

Amazingly, in 1997 New Labour not only went along with the blind faith in finance and but made matters far worse by raiding pensions, deregulating and allowing every crook and conman in The City to have a free run at government lending, subsidies and consultancies. By dint of simply slushing money figures around they manipulated the statistics to make it look and seem good. It was bound to go bust and it did.

Whether the Crash was due to the manias of Wall Street and Washington DC is a good question, much blame lies there. Equally, it lies with the City and the network of associated tax havens, together with the uncontrolled subsidiaries of The City in Dublin and Iceland. But the British government were as much to blame as anyone.

This time the Americans might just leave us to swing because they cannot afford to bail out themselves, let alone a criminally negligent bunch of Ponzi Scheme running shysters in London and criminally corrupt dependencies. In our troubled world there are new problems of who defends whom from what.

With London now the epicentre of world terrorism planning and financing the UK can no longer expect much sympathy or regard from elsewhere. In critical resource management and economic control, the UK has surrendered or given away its ability to manage or to influence. As some say, the UK government is now a minor subsidiary of busted banks. The beneficiaries are a range of entities who simply wish to extract and use and not to support or nurture.

The old HQ Sqn 7 Armd Div marched to “The Garryowen”, but as elections and economic busts go there is no cavalry to come over the hill and no shots in the locker with which to defend ourselves. 1945 meant a decade of hardship, for the UK this time round it could be a great deal longer.