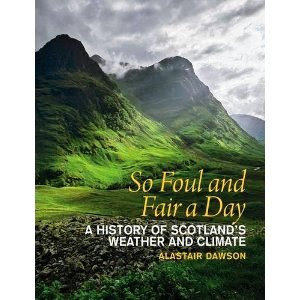 This was posted by Euan Mearns in The Oil Drum web site on Saturday 24 August about Alastair Dawson’s book “So Fair And Foul A Day” relating to the impact of geophysical events on the Scottish economy and history. Whilst the book takes Scotland as its basis it is necessary to remember that climatic and weather conditions, never mind the consequences of geophysical events, do not take much notice of recent man made political boundaries.

All the upland districts of the Atlantic Isles were affected as well as the arable areas. It is said that during the period of the Highland Clearances more people left the Yorkshire uplands to migrate than the Scottish.

With the eye of the global media now firmly trained on Iceland, this is a timely reminder of the power our restless planet has to disrupt our daily lives. With air traffic still grounded across much of northern europe, it is truly inconvenient to be a tourist stranded abroad, or to have cancelled a holiday or business trip. But in the grander scheme how serious is this really? European politicians are now awakening to the possibility of this inconvenience dragging on for days or even weeks and are now describing this inconvenience as a crisis.

Now no one knows how this eruption will develop. But historical records describe how previous eruptions on Iceland had truly catastrophic impact on Scotland's climate and on the welfare of its people during the tenth to eighteenth centuries.

Below the fold are three excerpts from Professor Alastair Dawson's excellent book, “So Fair And Foul A Day” that gives an account of the impact of earlier Icelandic eruptions.

Some of the most stupendous volcanic eruptions in Iceland took place some time between 934 and 940. The eruptions happened in the district of Eldgja in southern Iceland and nearly 220 million tonnes of sulphate aerosols were injected into the northern hemisphere atmosphere, which combined with water vapor to produce around 450 million tonnes of dilute sulphuric acid that was dispersed worldwide into the troposphere.

The Eldgja volcanic vents stretch along a 75 km length of southern Iceland between Mt Katla and the Vatnajokull ice cap. The early settlers of Iceland must have been amazed by what was happening. Hundreds of square kilometers were covered by lava flows associated with 15 separate eruptions taking place over a 6-year period. Some of the columns of ash are thought to have been in the order of 14 km high. The sagas tell of the destruction of farmland, the abandonment of land.

Some families are even described in the sagas as having attempted to rake the cover of volcanic ash from fields. No one knows for sure what the effects were on the weather of northern Europe. Some information can be gained from a similar, though less extensive, eruption of Laki in Iceland during 1783-84. It is well known, for example, that the years following this eruption were associated with the lowering of air temperatures across Northern Europe, the occurrence of dry sulphurous fogs and damage to crops and vegetation.

From what we know, the Eldgja eruptions were twice as big as those of Laki. Thus we may expect that the effects on society were at least as severe as those associated with the Laki eruptions, which took place throughout the summer of 1783. Although hardly any historical accounts exist for this period, there are descriptions of drought in Ireland at this time, when the mountains of Connaught were burnt with celestial fire, and the lakes and rivers dried up. There is also an account for 941 of a great frost across Ireland and the freezing of rivers and lakes, but no information is available for Scotland.

After another cold winter in 1689 to 1690 we enter the 1690s, associated by many with the lowest air temperatures throughout the period 1350-1700. Across northern Europe it was once again a time of dislocated society, population decline and abandonment of farmland. Scotland's climate was already in shock from freezing winter temperatures and wet summers when a series of volcanic eruptions took place. Mt Hekla, in Iceland erupted in 1693, depositing ash across much of Iceland and as far afield as Scotland and Norway.

It is also well known that a major southward extension of sea ice took place at this time across the Northern North Atlantic. Whenever this happened, the tracks of storms were displaced further south than normal, leading to bitter winter winds and exceptionally high rainfall across Scotland.

The year 1694 was particularly disastrous, since it was the first of seven years of famine across Scotland known as "King Williams Dear Years". The famine took place prior to widespread potato cultivation in Scotland and hence there was a great dependence on grain.

The famine is said to have begun with a cold east wind and sulphurous fog (from the Iceland volcanic eruptions) over the whole country. Hugh Miller from Cromarty, a self taught geologist and natural historian, one of Scotland's great figures from the nineteenth century, tells us in the only known written account of this remarkable event:

One night in the month of August 1694, a cold east wind, accompanied by a dense sulphurous fog, passed over the country, and half filled corn was struck with mildew. It shrank and whitened in the sun, till the fields seemed as if sprinkled with flour, and where the fog had remained longest - for in some places it stood up like a chain of hills during the greater part of the night - the more disastrous were its effects.

From the unfortunate year till 1701, the land seemed as if struck with barrenness, and such was the change on the climate, that the seasons of summer and winter were cold and gloomy in nearly the same degree. The wanted heat of the sun was withholden, the very cattle became stunted and meagre. November and December, and in some places January and February, became the months of harvest, and labouring people contracted diseases which terminated in death when employed in cutting down the corn among ice and snow.

1783 - a disaster across northern Europe

Then things deteriorated even further. In June a major volcanic eruption started in the Laki area of Iceland. The eruptions became more extensive after late July 1783 and continued until January 1784. The effect on the weather of northern europe was immediate. Across Scotland, clear summer skies were soon replaced by a haze of dust and a sulphurous fog which obscured the sun for 3 weeks.

In her diary from Kemnay, Aberdeenshire, Janet Burnett, unaware of the volcanic eruption, described how the leaves on the plants in her garden and the crops in the fields were withering yellow. In fact, the year became known in Scotland as "the year of the yellow snow".

The magnitude of the Laki eruption can be gauged by its catastrophic effects in Iceland. approximately 53% of Iceland's cattle, 77% of the ponies and 82% of the sheep died, together with 20% of the island's population. The Icelanders seemed to be facing complete extinction.

A committee was appointed in Copenhagen to devise means of relief. There was even a plan considered to evacuate the island and remove the entire population to Denmark.

Perhaps you ain’t seen nothing yet.
Posted by Demetrius at 12:43