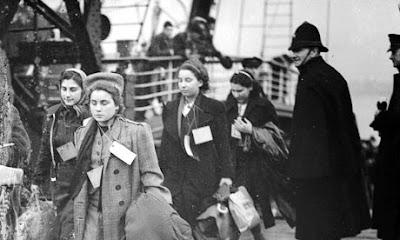 The Gordon Brown gaffe I understand arose from his conversation with a lady who was referring to the numbers of Eastern Europeans who had moved to Rochdale.

As it happens I know my DNA and my male Y chromosome is the result of a mutation that occurred around 25 to 30,000 years ago amongst early migrants from Africa. It is common over much of the Balkans, Eastern Europe, and the far North and appears further afield, notably in the Hindu Kush, perhaps carried there by the Macedonians.

Quite how or when mine arrived in the Atlantic Isles I cannot know, there are too many options that begin with end of the last Ice Age. What I do know is that it is found in The Malverns around four hundred years ago. Other parts of my DNA are from elsewhere in The Atlantic Isles from Caithness to Cowes and from Great Yarmouth to Sligo and from further afield in earlier generations.

It is safe to say the world is my family. The mainstream view of the geneticists is that our human species derives from a small number of survivors of the planetary volcanic crisis of about 75,000 years ago. Their descendants moved on and spread about the face of Earth. It seems that we are all cousins by one degree or another, I repeat all.

The immigration issue should be about the future, not the past. We are carrying a large amount of baggage from the 20th and 19th centuries and seem unable to rid ourselves of past fantasies about our status, influence and ability to manage life in the ordinary world. The real issue is the numbers.

Given the scattered indiscriminate movement down the eras many of us may not be what we think we are or what we would like to be. In that time there have been around three thousand generations to spread out and mutate in our DNA, bodily structure and appearance in various ways. Our breeding pattern is not seasonal or confined to particular nutritional sources and can be multi-partner. So we breed rapidly given the right circumstances and variations will occur.

So much for the baggage of race; what about the numbers? China has a population of around 1.3 billion, India of about 1.2 billion, Pakistan about 170 million, Bangladesh about 165 million and Nigeria about 155 million. If each has only a small proportion of its population migrating to the UK the number arriving here will amount to a larger proportion of the UK population.

There are many well populated bits and pieces of Empire and other places that can add to the numbers for one reason or another. We have opened our doors to all in EU. It seems that many from poorer countries with less generous social services have responded to the imperatives of comparative advantage. Also, quite a few French have had better luck in London than in Lens or Lyon.

In the second decade of the 21st Century we are in a very different world. There are more human beings on Earth now than ever before with an increasing proportion located in vast conurbations totally dependent on outside supplies of food, water and energy. The technology of transport and reductions in real prices has meant that large numbers can be carried from place to place and continent to continent at lower cost than ever before and with greater ease.

The development of media and communications has meant that many can define themselves in terms of other places and beliefs rather than according to the place they live. Many belief systems and national identities owe more to past propaganda and group myths than to any historical reality. It can be worse. Some people identify not just with real human groups but with fantasies created by the media for profit. Should I go into my Dr. Spock routine?

At present we have politicians losing sleep over their campaign promises and what cuts may or may not be made and how to persuade the electorate that all will be well. At the same time the mind baggage they carry means that they cannot admit that major increases in the population of the UK by whatever means will impose any sort of problem in respect of public expenditure or services.

Almost all the migrants and subsequent and other births will be in existing major conurbations or related urban areas and will require housing, the full range of public services, a health service free to all, and access to the benefits system, employed or not. It will require water, energy, and last but not least, food most of which will have to be imported and paid for by vastly improving the Balance of Payments despite an increasingly adverse Balance of Trade.

We are being asked to believe that these monetary imbalances can be covered by people sitting by computers in London flogging dodgy insurance deals, trading even dodgier financial instruments and screwing debt ridden residents despite the richest of the money men avoiding the most onerous tax liabilities.

The theory is that immigration necessarily allows GDP to increase to pay for all that has to be provided. This assumes that the migrants will be paying tax. Perhaps all of our richest recent migrants pay very little tax at all having their wealth in tax havens. The London Cronygarchy which employs a lot of cheap migrant labour argue the trickle down theory. Sadly, most of the trickling goes in import heavy consumption expenditure, overseas property investments and using minimum pay or zero wage labour.

Most of the poorest do not pay much tax and when their children and their relatives arrive some will add to the numbers of dependents and potential claims for benefits. Many migrants seem to be bringing in quite elderly relatives unlikely to work. A proportion do contribute more than they cost but for some it will be less because of the needs of their families. The government omits remittances from the calculations as well as incidental benefits exported.

Since 1997 the government has trashed the agricultural sector and given the big supermarkets, largely owned by big finance, almost unlimited power over the land. A consequence is that our food supply increasingly is imported from places that do not give a secure supply, largely on a just in time basis and dependent on petro-chemical based fertilisers and transport. Land is being made over not to feed us but to feed ethanol into our petrol tanks. Hunger could be less than a month away.

The energy policy badly needed has been deferred because it is difficult and does not win votes. The infrastructure of the water industry needs renewal as well as the expansion of storage, another policy area largely ignored to keep the money men happy. The NHS is in real trouble, the government tolerating casualty rates akin to a bitter military campaign and even starving the patients.

Education in a country with sixty million people means spending huge amounts, yet the cry is that we are critically short of many skills and talents. More are attending university than ever before but Tesco has claimed it cannot manage its shops without importing literate staff from abroad. Does nobody see the disconnection?

Housing policy amounts to building a new generation of urban slums. Benefits policy undermines family and community life. In terms of law and order an increasing number of patches of UK territory are now garrisoned effectively by gangs and groups not just outside the law but protected by it whatever they choose to do to others.

If the UK political system cannot cope with the issues arising from government debt and has to go begging because of past profligacy and population increase whether from existing or new population unsupported by provision for food, water and energy, then it will have to resort to some very unpopular measures.

Beggars cannot be choosers.
Posted by Demetrius at 18:18