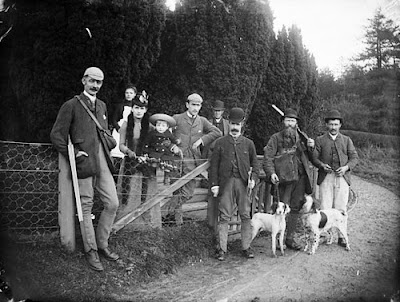 A sighting of Lord Mandelson has been reported from Waddesdon Manor in Bucks. A National Trust House, it still has the Rothchilds’ family around to keep an eye on all the treasures, and with access to the estate. The occasion of the visit was not a coach party on a Saga Holiday, but a traditional Shooting Party hosted by the resident Rothschild.

My Lord was not one of the guns, nor indeed even a beater; Cabinet Ministers going round using weaponry on our native fluffy things is bad media these days. As Business Minister, he might have been there to price our treasures for the coming national fire sale, however there was another guest. This one shoots the birdies for pleasure and is very good.

It was Gadaafi Junior, son of the Colonel of Libya, no eyebrows were raised, they may have been shot at. Junior had publicity recently when he accompanied Mr. Al Megrahi, the alleged bomber of Lockerbie, home from Scotland and gaol, to wild approval of the thousands herded up from around Tripoli to be there or else. The transfer was an arrangement caused a great deal of trouble, so much so that the puzzle of why it happened began to centre on business deals in Libya that had suddenly become of key importance to the government.

So what gives this time round? Were they just keeping up to date? Was it a private pre pre agenda meeting about discussions to be had at some date involving major deals? We shall never really know because the respective parties did not care to say anything, it was just a fun weekend for the boys.

The problem is that My Lord has a lot of these fun weekends with one magnate or oligarch or another, and that means that either big trouble or something substantial to our disadvantage financially is on the cards. Being Libya, almost certainly this means oil and gas.

Quite what might be guessed at in terms of the future is very uncertain. There is too much going on, too much confusion in the debate and too little reliability in any of the estimates even in the short term. One possibility is that My Lord is very anxious to secure a deal in a hurry, to commit the UK before the coming election to a course that is profitable and useful to the favoured few of the Labour Tyranny. If this is the case this is bad news for the UK taxpayer, that diminishing band of serfs who still can be forced to pay.

The 1985 film “The Shooting Party”, concerned the declining Edwardian Landed Elite trying to come to terms with a changing world in which their power was lost, and control handed over to populist politicians contending with the financial elite of the period. It ends with one of the beaters, a true honest man of the people, being gunned down in a fiasco, whose last words are something like “God save the British Empire”. He was killed by an over ambitious shooter going for a quick sighting.

I believe that it was Meyer Amchel Rothschild, 1743-1812 who said “Let me issue and control a nation’s money and I care not who writes its laws.” Perhaps My Lord should swot up on the family, with particular reference to the period post 1815 when they tried to corner the gold market.