Olympics Security - The Cat Has Emerged From The Bag 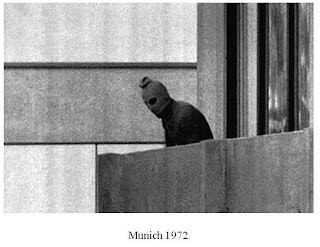 The story below popped up on the BBC News Online – England – London page today, apparently arising from the Radio 4 “Today” programme as an incidental comment. It did not make the national news or listings, perhaps it might have made the provincials nervous.


Resolute readers of this blog will have seen it all before, although in a much fuller explanation. Tuesday 12 May was when I posted “2012 Olympic Security Costs”. This item was written at the end of last year and I had given it some circulation although to no effect. Why is the London media so coy about this one? It is one reason why the government needs all these stringent security and control laws and regulations


The level of terrorist threat at the London Games is expected to be severe, the second-highest level, he added. Lord West is reviewing the best way to protect built-up areas, transport systems and national infrastructures from terrorist attacks.


"We do not underestimate the scale of the Olympics challenge," he stressed. Speaking at a conference in London on Olympic security, he said it was important to ensure measures were not so heavy-handed that they frightened people away from the Games. "The Olympics and Paralympics are about sport and not security.


"We want the world to be inspired by sport in London, and our security plans have to strike a balance between visible security and the welcome that we want." Lord West went on: "There is no doubt that the 2012 Olympic and Paralympic Games promises to be the greatest Games in history - and possibly the greatest security challenge the UK has faced since the Second World War."


Shadow security minister Dame Pauline Neville Jones, who is attending the conference, said that the role of the armed forces during the Games must be confirmed. In January, Gen Sir David Richards - who is now head of the Army - told MPs that "the sooner we get clarity, the better" on the Olympic security process.


Dame Pauline believes the Army should have a role at the Games, but stressed this did not necessarily mean that soldiers should conduct high-profile patrols. "What I understand at the moment is that there is agreement that they should be part of it, but they haven't yet been told what they are going to be doing," she told BBC Radio 4's Today programme. "That's one of the reasons I think General Richards wants to know. "He has to factor that in to what he's doing with his men in 2012."


A Home Office spokesman said that the armed forces were expected to provide additional specialist support and back-up to police and other security teams at the Games. Two senior staff from the Ministry of Defence have already been seconded into roles on the planning team for Olympic security, he said. He added that "a lot of work is going on" to make arrangements for the Army.


We truly live in a weird world. An irritable old man with a cheapo computer left with only his thoughts, can beat the whole panoply of State and security in realizing the blinding obvious, and without a penny of bonus.
Posted by Demetrius at 13:09