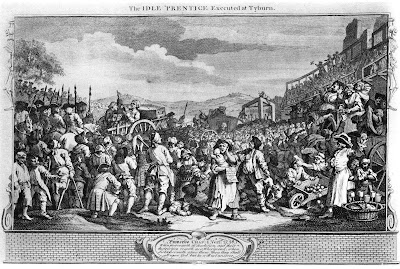 When my bleary eyes lit upon the combination of words “Hung” and “Parliament”, for a brief moment I was cheered by the thought that there had been a coup and whoever had grabbed power intended to hang the lot. Alas, it was all about the dry stuff of what happens after a general election when in the House of Commons no one party has a working majority and some kind of alliance has to be made to allow the work to be done, and critically Supply to be maintained, that is budgeting, taxing, and spending.

There has been some heavy trawling of the past to find examples to guide us. Fat chance; even the 1970’s are too long ago, and too remote for much real comparison. What the play might be in a modern parliament is anybody’s guess, and barely any will guess correctly. At least the rooms will not be smoke filled, and that is as far as I will go. The People’s Charter of 1838, which formed the basis of the proto-revolutionary movement of the 1840’s and after, had six basic principles.

A vote for every man over 21, now we would include women; a ballot, that is a secret vote, we did have this but the fiddling with the system of postal votes etc. has changed all that; no property qualification for MP’s, in recent years many have used their expenses to restore that in effect; payment of members, again our recent MP’s and Lords have fouled up that one; equal constituencies, that is to prevent small ones overcoming bigger ones, a form of gerrymandering in the wrong hands; and annual parliaments to check bribery and intimidation, a fine ideal, but a general election every year would be too much for most people, and likely to hand power to the civil service, and other cohorts.

To pick out the principle of “equal constituencies”, this is the potential blight over the result of the next election. Experts suggest that the Conservatives will need to win by a very substantial proportion of the votes cast in order to overcome the Labour bias in the way the present constituencies are based. We are supposed to have a Boundary Commission to sort this out and to ensure a reasonable comparative basis between them. Why has this not happened? Why is there such a disparity between so many constituencies? Just what has this Commission been doing?

What is even stranger is that organisations that might pride themselves on being the heirs of the revolutionaries of the past are almost frantic and shrill in their protests of change. The GMB trade union for example, nowadays best known for caring for its sex worker members, but with an original membership based on Municipal Workers, and Boilermakers, the latter with a history going back to The People’s Charter. It has swept up a number of other groups in recent years. Its recent newsletter to members is essentially an election campaign document in which it attacks the Conservative Party.

One policy it fastens on is that of change in the House of Commons, notably the Conservative suggestion of a reduction in the number of members and the restoring of balance. The GMB strongly objects to any change on the grounds that it could affect the number of Labour MP’s adversely. The conclusion must be on the basis of the nature of the present Labour Party that the GMB has now abandoned any of the Principles of the Charter.

Down with democracy and the equal value of each vote. The state is a client state, and the property laden leadership and membership of the Parliamentary Labour Party must retain the reins of power. The GMB is a powerful lobby for Labour’s clients. Perhaps we should have more frequent Parliaments to curb the bribery with taxpayer’s money, to really have equal electoral districts, and maybe go the whole hog and change the voting system to more accurately reflect the vote, and accept that coalitions could be the norm.

On the other hand, I hanker for the return of Tyburn for errant MP’s, it would be a lot more fun for ordinary taxpayers.