Europe - The Return Of The Habsburgs 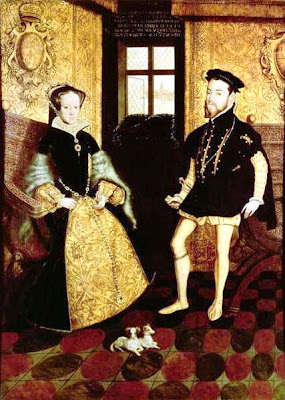 Well, after all that, we are now agreed that basically, taking everything into consideration, and looking at all the options the Habsburgs were right. It is now admitted by our leaders in Europe, not all of them elected, that after about six hundred years, all those wars of ideologies, wealth and empire seeking, dynastic disputes, and sundry fighting between other groups with particular agendas were a waste of time, men and money.

If only those misguided people our forebears trusted with power in the past had just let the Habsburgs, their Emperors, Princes, Dukes and the rest get on with running the show, religion, trade, and everything we could all have lived happily ever after. Perhaps Herman van Rompuy and Catherine Ashton do not much resemble King Philip II of Spain, and Queen Mary Tudor of England who married at Winchester in July 1554 (above), but they are the best Europe can do for the time being. Tony and Cherie would have been a little too Ferdinand of Aragon and Isabella of Castile.

I will skip the slightly complicated history of the Habsburgs, it is all there on the web and Wikipedia serves for starters. Nor do I suggest that the various descendants of Habsburg’s line scattered about the world should be elevated to high positions in Europe. They seem to be a sociable lot, but their heritage has meant exclusion from politics. They could almost claim to be an ethnic group who have suffered social and political isolation and apply for the relevant grants from Brussels.

The point is that the Habsburgs, Holy Roman Emperors and all that, not only ruled much of Europe and beyond, but in the parts they did not have direct rule, exercised a profound influence over what went on. Moreover, many went in for micro management to an astonishing degree, complaining that they were slaves to their peoples. We can also ignore their foibles and eccentricities, difficulties in personal relationships, and consequences of genetic inbreeding. They are minor compared to those of many of the current European and UK leaders, and as for the UK we can substitute “political” for “genetic”. The effects of that are infinitely more serious and damaging to the business of ruling than the odd twitching of the DNA.

The Europe of the Habsburgs was a sprawling regime with its many parts rarely functioning in connection with the others. It was a massive tax and wealth gathering entity which spent vast sums on prestige projects, personal palaces, and in enforcing the doctrines of which they and only they determined and defined. It was multi layered to a bewildering and complicated degree. Most of the time of its functionaries was spend in working out who they were and what they were supposed to be doing. If they found that out, then someone higher up would confound it, and it will all start again.

Public decrees would be made, laws and regulations issued, but how they came to be or why would be shrouded in deep secrecy, and only the powerful or the proximate would be party to any of it. This meant that as you went down through the levels of administration, matters became slower and slower, and more uncertain. Nobody quite knew what decisions might be made and when, unless, of course, they paid good money to find out and obtain the right result.

There was a proliferation of senior, high paying, posts to satisfy the many clients of the state, and as many of the highest gathered so many of them to themselves, then there was extensive delegation to much cheaper and junior officials whose only hope of survival was to extract as much income and as quickly as possible. The Empire had a monopoly of policing and military matters that were closely combined and under the instruction of the doctrinal and legal administrative classes, so that rebellion was prevented, and any reformers or opposition would be classed as rebellion or heresy and dealt with accordingly.

At the highest levels it was necessary to have connections and background that were absolutely correct. Without the sixteen quarterings of the right families you could neither be admitted to nor held worthy of rule. Then it was ancestral because that was held to the test of rightness or wrongness. Today there are other tests of political correctness that amount to the same thing. The are boxes that contain the right configurations of display, beliefs, and membership.

Nobody really knew where the money went, and accounting was simply an exercise in writing fiction. Who was supposed to getting the money was one thing. Who really benefited was quite another, sometimes completely random in effect, and at others going to people who had abused every office they held. There were some political jurisdictions which held out against the Habsburg system, but in the 21st Century by the more effective methods of modern communications and means of propaganda they have been suborned and defeated.

For almost a century Europe was freed of the last of the Habsburg heritage. But it has been too difficult to shake them off. They may not be back in person, but their political tradition has triumphed. Their system is back, bigger and better than ever and we are all now subject.

At least we will not have dynastic or other wars, if you forget Afghanistan. Well, not for a year or two.
Posted by Demetrius at 14:39