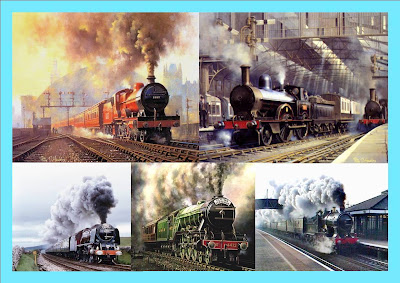 The Government has just renationalised the old LNER East Coast Main Line, lately run by National Express, who gave up for financial reasons, and who took over from GNER whose franchise went bad, essentially for the same reasons. Not too many miles away in Earth distances is the West Coast Main Line, more or less in the hands of Virgin Rail, that allegedly turns an apparent profit, but only after huge government subsidies, hidden and otherwise.

Both just operate the trains, all the track etc. is in the hands of Network Rail, I am told a non-dividend paying setup and what is left of Railtrack after it went into a sort of you know what I mean government administration at high cost to the taxpayer. In short the existing railway lines from London to Scotland are costing us all a great deal of money even if we never travel on a train.

Amongst the flurry of prestige project proposals from the Department of Bright Ideas run from the Cabinet Office frantically trying to shore up support in their political heartlands and to outbid the enemies south and north of the Scottish Border is for a new railway from London to Scotland, that is to be built up to Birmingham and Manchester and then to fork West and East to satisfy the party faithful either side of the Pennines, and in the long divided communities of Glasgow and Edinburgh. This is to be a high speed line built to European standards. What a pity British Railways closed and tore up the old high speed line in the 1960’s at the urging of a Labour Government, just for the record I worked on this line for a time.

The cost currently mooted is a stunningly cheap £30 billion. If my memory is correct the existing Eurotunnel tunnel line, much shorter and less complicated, estimated at an affordable level, went way over budget, and landed the government with a huge problem in refinancing and other costs. Even now, with the debt waived away, it is a struggle to do well, the freight has not been forthcoming. The latest wheeze has been for the Ministry of Transport to strongarm South Eastern Railways into buying a number of Japanese trains and run a high speed service from St. Pancras to improve times to Thanet and East Kent, coincidentally where there are Labour held seats.

How well this service will do has to be seen. One way of trying to make it pay has been both to cut and slow down services along the three existing lines. The high speed times are quicker, but not that much for the money the punter has to pay, and St. Pancras is a lot less convenient as a destination for most than either London Bridge or Charing Cross.

If, at least out of a sense of humour, we allow that the new lines will be built for that £30 billion, then do the finances look like? The train sets will not be cheap, there is a lot of expensive looking hardwear there. The operating costs will also be high. Who will travel on these trains? It will not be the 25-30% of the Scots population currently on benefits, and nor is likely to be many of the other 30-40% in public sector jobs catering for the locals. The private sector has a lot of low paid labour. It means that it will depend on the limited number of high rollers in the private and public sectors currently entitled to first class travel.

There are not that many of them to sustain such a service and some may prefer to fly. If the good times were to return and many could use the high speed high cost service, then it will wipe out much of the First Class element so important to the existing franchises. All in all, is there is snowball’s chance in hell of these new lines making the one or two billion per annum above operating costs to pay the interest and financing charges on a £30 billion build cost, plus train sets and other installations? If the usual suspects that handle financing, consultancy and other costs are to be involved think of a few figures then write in the largest.

Currently Birmingham already has two lines to London, also there are two from Leeds. Although Manchester has but one, it would not take too much to reinstate one of the old ones. I could go on at length at what series of minor improvements here and there could be made to existing lines that could transform times and service. But this would not be politically “sexy” and would not shower money on the Governments favourite accomplices.

Also, I have explained before that the obsessions of the old companies as well as British Railways with the East and West Coast main lines had a seriously damaging effect on other provision. There is a great deal that could be done, both in England and Scotland. There is too much to explain again about the possibilities. They involve improvements in areas and constituencies that are not Labour held, and that would take responsible government, something that we have long forgotten.

During the Miner’s Strike of 1984-1985 one of the running jokes in Yorkshire was what Arthur would come up with next. One favourite was that he would demand that to give work to unemployed miners the Channel Tunnel should start in Barnsley. If Brown is re-elected will Arthur be invited to turn the first sod on the new high speed line from Camden to Cowdenbeath?