Dubai - Tales Of The Unexpected 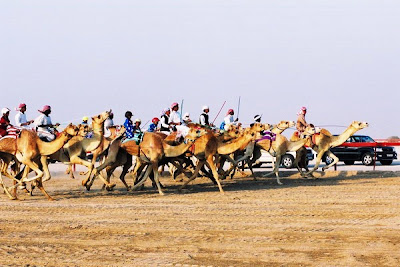 When Mick, a school mate who lived a few streets away, drew the RAF for his National Service, he was very happy. His mum thought it was higher class than the other services, and as he was hoping to qualify as an accountant by part time study, the chances were that he would spend his time moving figures on paper. A lot of people in the RAF did that. Also a Tory believer in Empire, he would be doing his bit.

It was three years later when I saw him again in a pub in town. He looked a lot older and slimmer. I asked him how he was getting on, he was close to qualifying. Then I asked him where he had been. It was Habbaniyah Air Base, near Baghdad, Iraq. That must have been interesting, I burbled, and inferred it had been a “cushy number”. It hadn’t, the RAF had enough paper merchants, he had spent his time in a very hot hangar wielding spanners and spraying oil. So what did you think of Iraq, I asked hoping for a happier response. He told me that they should give it back to the something camels. It was then I knew The Empire was lost.

In the meantime, I had worked with an officer who was coming to the end of a staff post and destined for a period with his Regiment, then based in one of the bleaker parts of Northern England. Instead he volunteered for secondment to the Trucial States, now called the Gulf States, where the UK maintained a small military presence and provided officers for their internal forces. I knew little or nothing about them until a few years later when I had dealings with a number of Sheikhs, charming and courteous chaps who knew how to spend money.

So when Dubai began to be newsworthy and TV programmes waxed lyrical about its delights and wonderful opportunities for investment, and all the very clever and talented people who were pouring money into property there, my instinct was that it was possible, certainly, but could it be as good as that? It was all that shifting earth about and building high and handsome. My first thought was that if you are extracting liquids from below, oil and groundwater, and piling up stuff on top this could be a problem in the long term. Another was that the work was done mostly by passing expatriates using huge numbers of migrant labour, earning little, and housed in grim hot barracks. This might not have happy consequences if things went awry.

Then there was the geology and climate of the area. It is in a fault zone, and close to a major one that regularly delivers hefty shocks in southern Iran. Movement occurs to the south of the Gulf as well. One major earth shift up or down and everything goes. Another is the climate, which means that to try to survive in ultra hot conditions, sometimes with either vicious weather storms or dust storms; the energy demands are very high. Living in concrete boxes at 40 plus needs air conditioning and the locals in past ages have taken to their tents wherever shade can be found.

So my money has been on either a bad earth shock or a prolonged period of adverse weather conditions causing severe problems. It has happened in the past. I did not reckon that with the oil wealth that they would manage to have such a spectacular financial bust. I should have remembered that they are good at spending money. Amongst other places where the loot has gone is the English Racing Industry, which has become critically dependent on money from The Gulf. A sharp contraction here could cause very severe problems.

Would this mean that the Epsom Derby might become a classic camel race? I will have to find Mick on the web and see if he has a good tip or two.
Posted by Demetrius at 14:30