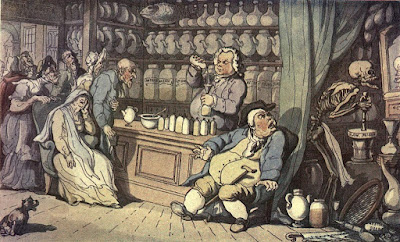 The question of the National Health Service is at the forefront of the news again, the several layers of crises now compounded in the queues at hospitals and pharmacies. In the debates we forget that the NHS was born in crisis and that medical crises were recurrent in the previous decades and centuries.

In 1937 the retiring Prime Minister, Stanley Baldwin delivered a call to Empire (it is on Youtube) which referred to Britain as a "sacred temple", saying "And what is her secret? Freedom, ordered freedom, within the law, with force in the background and not in the foreground: a society in which authority and freedom are blended in due proportion, in which state and citizen are both ends and means."

In the Empire, however, there were peoples who disagreed with his vision and their views were shared by many in Britain, notably in the then Labour Party and its associates. But they had their own "sacred temples", nationalised industries and services, that would be the core of a new Britain.

The Labour win of 1945 under Clement Attlee, a former Major in the South Lancashire Regiment who did time in the trenches; and Lecturer at the London School of Economics, enabled them to build these temples, if not in a green and promised land, in one that they intended to control forever and a day.

By the late 1940's despite extensive local provision and other services plus charities and Friendly Societies, Trade Unions etc. the demands had overcome the supply. Two world wars had left many disabled and damaged men and women. The filth and smog of the air in major industrial and areas had become intolerable.

That many jobs for men and some women was physical labour; often hard and risky, took its toll with mechanisation and modernisation being opposed to preserve jobs. We have fun with the extremes of health and safety ideas, but then these matters were ignored.

Last but not least there were not the medications and treatments then which we have now. Tuberculosis was still a scourge, typhoid a continuing risk and various illnesses common could leave people scarred or damaged for life. Then venereal diseases were rife, the product again of wars and social breakdown.

Another severe problem was the loss of hearing common. Often arising from ordinary ear infections but also noisy work. Air pollution and dirty jobs did not help eyesight along with other strains . Poor diet and lack of awareness meant teeth falling out. A good many people had lost their molars by early middle age.

There were other matters, not recognised or admitted then which may have played a part that we know about. Tobacco is the obvious one. Even doctors might recommend it as a palliative for catarrh or chest problems and its alleged antiseptic properties. Products with high sugar content continued to be promoted as healthy for decades come, if you could get it.

When the National Health Service opened to free treatment etc. for all, all came and the money was wasn't there, nor the staff. Moreover, while the Tredegar Model may have worked for Bevan, the Health Minister in Wales, it did not in many other urban areas which had developed long standing complex arrangements which did not fit the new boundaries etc. being imposed.

It is said that the consultants and doctors were opposed. They were to the way it was run, to what they saw as jumped up office boys telling them which patients they might see, how and where they were to be treated and which medications to supply.

The politicians at Westminster had been unaware of just how varied, complicated and interwoven health service had been and how destructive so much of the top down politically driven administration was.

This was seventy years ago and a reality of history that has been forgotten, if not ignored or put to one side because it did not "fit" with what people would have liked it to have been. By the late 1970's the NHS as a top down state funded nationalised service had become like British Rail, only without timetables or signals.

It could not stay the same, it could not go back to any past, it could not reorganise internally because it did not have the authority and in many ways it was having difficulty in maintaining basic service and only able in a limited way to cope with the advances of science and other world treatments.

So here we are today, with a set of problems which many look the same in some ways but is not. We are dimly aware of the impact of obesity via diet, alcohol misuse, traffic accidents, but not of other things. We have taken a liking to loud, very loud, sound regardless of the acoustic impact.

The amount of powerful chemical products in the foods of the masses as well as other products and in most of the air we breathe is astonishing compared to the past. Quite how all this interacts with the body, blood, brain and systems we are not sure.

Globalisation and air travel has made tourism a major part of modern life. But some tourists are less interested in the sights or history, they are more interested in perhaps the entertainments and an increasing number in what is on offer either cheap or free that cannot be had at home. So we have seen the growth of health tourism, especially free on demand, in the UK.

Many of those from abroad do not share our identity with the concept of individuality whether Neoliberal or of the Left. They see themselves as belonging to and part of extended families and population groups. So when one or a small number arrive we have opened the doors of our hospitals and surgeries to many more. To them could added the "students", the illegals and others.

The effect is cumulative so we no longer have a National Health Service, that has gone for good and will not be coming back. We have created a European and International service that the UK State cannot pay for at present and given its rapid expansion never will. So unless you can afford otherwise I'll see you in the queue.

As Stanley Baldwin said in 1937 at the end of his speech. "I can think of no better message to give you to take away than that."