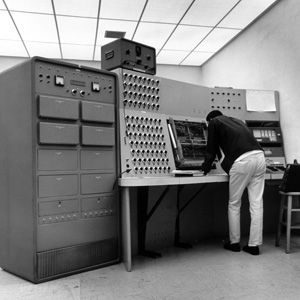 It was January 1968 when I attended a meeting to do with basic information inputs to be dealt with by the University of London computer, then one of a small number of the existing and very big ones. We were not techie's so they had a tame computer man there to explain things in simple terms, he was advised to make it very simple.

Dazzled by all the media space coverage, never mind the rabid fictions of the future coming from publishers and government departments we were disappointed that what he had to say was so basic and mundane. He was talking about work a day matters, office procedures, accounting and such like.

Afterwards, over the coffee, talking to him I suggested that there was a basic flaw with computers in that if all these things were to be done by machine then the whole of central London would be filled with them and not much else. What about the workers I asked.

He took me to the window and pointed to the large building then housing the university machine and all its acolyte staff. Then he pointed to the public lavatory in the square and told me it was thought possible at some time to get the same into a facility of that size.

Also, it was conceivable that in a far distant future it might be no bigger than one of the stalls. Our children or our children's children may live in such a world.

Ever humorous, I remarked "then a cistern". He smiled and said "perhaps, and then a pint glass."

We did laugh at that one.