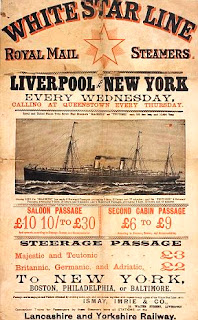 One of the features of the media is fake news with manipulation of the public mind along with propaganda and the rest. The major providers of news and comment, thanks to the net etc. have closer examination than in the past from many who are ready to question what governments, corporations and the media tell us.

It is not simply news, it is found in other sectors and entertainment. When putting up a BBC TV progamme dealing with history the question is which, how and why etc. boxes will be ticked and in what way. A fascinating part is often what is left out rather than what is in. Another is how the presentation might suggest facts when it is analysis, or guesswork or simple supposition.

The series running at present "A House Through Time" is a good example of this given the mix of family, social, economic and political history it tries to fit in within the limited time and scope. We are given shots of library shelves, archives, original documents and expert comment to suggest it is all true and to persuade us that the conclusions are necessary.

The house is in Liverpool and the four programmes cover it from building around 1840 to the present. This is a lot of people and a lot of change and each programme selects some and goes for three main parts on the basis first what information is available and secondly the personal interest that can derived from them.

But I have known Liverpool since the 1940's, knew grandparents who knew it from the 1880's and they knew people from the previous decades. More to the point, my interests have meant a lot of work done in research etc. and one field has been in Liverpool. This has included transcribing original documents, writing and assisting the Liverpool Family History Society.

Three episodes in and while a great deal has been said about class and status religion has been left out of it apart from a reference to the small Jewish community. This is astonishing. The Liverpool I knew had major religious divides and this went back more than a century. To add to the Irish influx not just Catholic but Orange and fiercely Protestant, Lancashire had long been home to a major Old Catholic community. The many Scots had brought with them their own congregations as did the Welsh.

At the other extreme, episode 3 involved a saddler, named Snewing, with a rich Uncle Charles. We were given the impression that property was the source of the money. But Charles had bought a horse cheap and entered it for the Epsom Derby. In a large field and unruly race the nag "Caractacus" won and Charles put it out to stud early. In short the family money came from coupling horses, perhaps too rich for the BBC.

The slavery issue came up early in episode 1, with a cotton broker, Wilfred Steele of the 1850's. This rested on the cotton being loaded by slave labour onto ships in America. It was assumed that the cotton brokers were happy with slavery and benefited from it. That Steele went on to join the Union Army during the Civil War was down played.

But we do not know whether the individual brokers did or not support slavery, I suspect many did not. One of the names glimpsed connected to Steele was a John Vero, a ship broker. His Vero's were connected to people whose families had been at the forefront of Abolition in the British Empire and later fully supported the Union during the Civil War.

On the Liverpool docks in the 1850's before the age of modern Trade Unions many of the labourers unloading had arrived in Liverpool as a result of the Irish Famine and Highland Clearances along with the English escaping agriculture and the landed gentry, for example the Britten's in Birkenhead and Benjamin's grandfather. The cotton went to factories notorious for child labour and bad conditions and the servile status of the mill workers.

Near a century later in the house in episode 3 by then was a low income family sharing with others. The man had epilepsy and this was taken for theorising about how he managed to work as a labourer being disabled and the role of the Trade Union and that being before the 1948 birth of the NHS it was untreated.

I recall Liverpool in the 1940's as a place very much ahead of many others in its medical services and facilities and with a medical school. It is most unlikely that he did not have some medical help. In those days epilepsy was something for which there was no cure. What did happen with the disabled, of which there were many for various reasons, was that it was the norm for the families or communities to take care of them.

When labouring on the railway in the 1950's we had a school leaver of very limited abilities and a veteran of WW1 who needed help when he freaked out. They did the "soft" work and the fit did the "hard". It was common for the disabled to be "carried" as far as possible.

The last episode to come will deal with the post war decline of the district and the slum it became. It is fairly predictable I think which boxes will be ticked. I wonder what they will leave out this time and why?