A Scribble On Writing 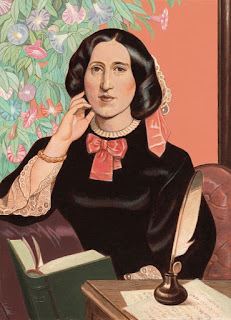 The great thing about a "what if" question is that you can make your own rules. With so many engaged in rewriting the past to fit their various bills beyond honest speculation anything goes. The last item was about an author, so what of others of that general era?

There has been a documentary on Beatrix Potter recently and this is an easy one to second guess. The author of those very special children's books was a woman with many talents. As well as writing she was engaged in property dealing with the objective of saving The Lakes as they were for posterity instead of being covered in bungalows. She is admired for this as well.

But she was a great scientist who never was. On writing a paper which deserved the attention of the Linnean Society she was neither permitted to join it nor to read it at their meetings. Had women been accepted she might well have become an academic and researcher of high standing. Also, she was a fine artist, again on the outside as a woman.

In earlier years there had been the author "George Eliot", above, otherwise Mary Anne Evans, again who also might have become a leading academic or commentator. There were the Bronte sisters of Yorkshire, who were so active in the field of letters. As daughters of a parson, what might (May?) they have become if they had gone into politics and social reform?

Which brings me back to that other parson's daughter, Jane Austen, who died too young. I like to imagine her living longer and having carved out a career in the Civil Service as a formidable administrator and organiser.

Imagine Jane at the Board of Trade, holding a discussion in the late 1820's in private meetings  with say the Duke of Wellington and other leading politicians and landowners on the subject of the proposed railway between Liverpool and Manchester.

She might have pointed out to the Duke that another prime county for railways would have been his Hampshire and given her knowledge of the local area she would have been able to tell him what other major families might have had to say and their objections.

Notably, that the real investment problem was the King's Highways, in a bad state apart from a few toll roads and all the parish roads. These heavy capital cost railways might be very useful for short distances, industrial plant and mines but on a larger scale were financial risky with running and maintenance costs little considered.

Also, the benefits were restricted largely only to those places and interests served by railways and their immediate areas. Indeed a few people might make a great profit but very many would suffer a loss. If the money went to railways where would be the funding for all the road works so badly needed?

Indeed steam had a future, but surely the investment and better returns would come from the maritime uses and in particular the vital role of the Royal Navy. In any case the power units could be of various sizes so smaller vehicles so powered could use the highways. Also, as there were other fuels than coal far wider scope would be available for transport.

Which brings me back to Beatrix Potter. Her father Rupert Potter is very underestimated man. As a leader in the Unitarian faith at the time he was at the forefront of a great deal in the arts, science and industry. Moreover, in 1871 when Beatrix was quite small he was the next door neighbour of Sir Louis Mallet.

Mallet was a KCB and Secretary to the Board of Trade, a key post. He went on to be on the Council for India and traveled there where he would have met Auckland Colvin, Treasurer for India, whose maternal grandfather, a clergyman, was known to Jane Austen.