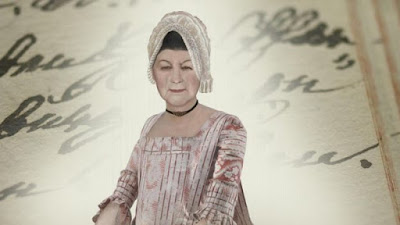 For those into literary history and ancestry chasing there were two items in the media about very different subjects that made an interesting pairing. One was Boris Johnson, one of whose seven times great grandmothers was Anna Catharina Bischoff, 1719-1787, above, who married Christian Hubert Baron Pffelel von Kriegelstein.

Generations later according to the BBC News this gives us Boris Johnson. The remains of Anna in Basel have yielded DNA and other information that enable an artist to create an image of what she may have looked like. A handsome lady, with many descendants, so Boris is not alone.

If Boris was taken back to the Switzerland of the 18th Century what would Anna and Christian have done with him? Possibly what some Swiss families did in those days with extra and disposable sons, send him off to join one the Mercenary companies that the Swiss rented out to warring Kings and Princes.

Meanwhile, back in Liverpool, the John Moores University has developed a computer modelling system that enables moving digital pictures of people of the past to be created on screen who are able to speak in what might be their own voices. These are derived from their remains and other sources.

Burns Night was a thought to be a good time for this to produce pictures of the real Robert Burns, 1759-1796, reciting his poems. I suspect many Scots and others of that ilk across the world will not like it. We have little to go on and the major likeness is assumed to be the portraits of a handsome, almost pretty person who looks well in tight breeches.

What we had on screen was the kind of man one might come across in a bar or club around the Clyde who had a gift for words and the wit to write much of it down and to circulate it. An ordinary man who had grasped an education in a far from ordinary world and trying through his poetry to make some sense or meaning of it.

In England one of the possibilities for such a man is that he might have been found a parish by one of the landed classes and with little work to do so he could think and write as he might. In Scotland there was no chance of any ministry so it was a farm at a time when weather conditions were very bad for years and it led to his end, tragic and far too young.

Asking if they are related might seem to be a dubious question. But this very recent work at Trinity College Dublin on DNA has moved research on a great deal. In fact it tells us something we already know, that for centuries there has been extensive movement around The Atlantic Isles and from beyond.

The researcher is an Irish Byrne, there are many of them. Robert Burns could be less Scottish that we think he is. Boris may well have some Scots lurking in the darker corners of his ancestry. If only Stanley Johnson had put his foot down on Boris, his son, and instead of allowing him to do the classics sent him to the Royal Agricultural College.

We would not have to think about him chasing about London and the world, because he might be up there in the Cotswolds chasing sheep.

And maybe writing poetry in the style of Ovid.